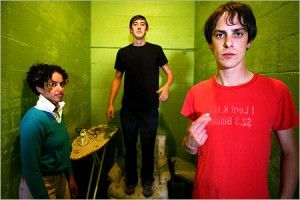 Raucous and harmlessly brash, Portland’s The Thermals make the type of catchy, three-piece punk rock that had been conspicuously absent until their 2006 breakthrough “The Body, The Blood, The Machine” brought them widespread appeal. When a lot of bands used the studio to layer an infinite amount of tracks onto each mix, The Thermals reduced indie rock to its core of guitar-bass-drums-distortion, unleashing a scathing anti-Christian rant in the process. The band’s 2009 record, “Now We Can See,” unveiled a new polished pop attack, mixing downhearted lyrics, told from the point of view of a reminiscing corpse, with catchy, shout-out-loud choruses, fueled by bright guitar riffs. Lead singer Hutch Harris has a partially playful element to his voice–despite the frequently pissed-off lyrical material, his attempts at shouting will never come across as menacing, but the sincerity evident in each note will earn a listener’s respect nonetheless. (Andy Seifert)