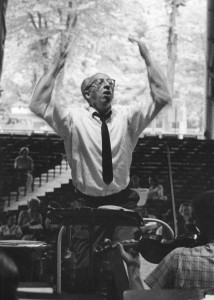 Aaron Copland rehearsing the Chicago Symphony at Ravinia in 1968. (Courtesy of Ravinia Festival)

This all-American program conducted by James Conlon celebrates the twenty-year death anniversaries of two American giants who were both composer-conductors, Leonard Bernstein and Aaron Copland.  Despite both icons passing away in 1990, Copland was nearly a generation older than Bernstein and had turned 90 just a few weeks before his death, while Lenny was 72 when he died and had joked in his later years that had he known he would live so long, he would have taken better care of himself.

Curiously, despite having written some wonderful music over the years, Bernstein remains primarily a conductor in the public consciousness, while the reverse is true for Aaron Copland, who made some wonderful recordings as a conductor—particularly of his own music—but is best remembered as a composer.

Bernstein and Copland also performed at Ravinia on a number of occasions, as did George Gershwin, who appeared at the festival once as a pianist playing his own music in 1936, a year before his death, and whose Concerto in F will be heard on this program with soloist Orion Weiss.

Copland will be represented with a complete performance of his “Appalachian Spring” ballet and Bernstein with a rare performance of his Symphony No. 2, “The Age of Anxiety” with Joyce Yang taking the piano role of the composer himself wittingly contemplating the poetry of W. H. Auden with a orchestra including a large battery of percussion as worthy protagonists.

A two-hour pre-concert seminar (2:30pm-4:30pm) with musicologist Robert Greenberg on all three composers will be free for ticket holders. (Dennis Polkow)