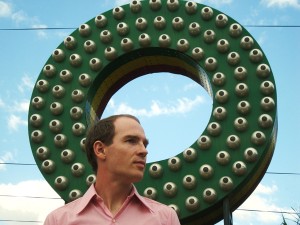 Dan Snaith began his musical career as Manitoba, before an unfortunate legal issue forced him to change his name to Caribou. But over time, there’s been a lot more changes at work than merely replacing a maligned moniker. Initially stamped along with friend and sometime collaborator Four Tet with the unfortunate “folktronica” tag, Snaith began building an impressive body of work, with early albums like “Up In Flames” and “Start Breaking My Heart” showcasing his ability to find both beauty in subtle rhythms and childlike innocence (“Crayon”) and energy in wiggy freakouts (“Lemon Yoghurt”). While these extremes were all tempered within the context of their respective albums, as a remixer Snaith was sonically emancipated to retread the widely varying work of others: adding barely perceptible touches to the twangy slide guitar of Mojave 3’s “Bluebird of Happiness,” juxtapositioning skittish caffeinated beats and near-trademarked chimey serenity to Junior Boys’ “Birthday,” and, my personal favorite, a completely unhinged noise-to-rolling breakbeat treatment of Seelenluft’s anthemic 2003 breakout “Manila.” This year saw the release of Caribou’s “Swim,” an epic leap in evolution that showed Snaith’s succesful move to more dance-floor-friendly material. And while his last album “Andorra” began showing Caribou’s shift from instrumentals to tracks with vox, like the swirling, Brian Wilson-tapping “Melody Day,” “Swim” showcases Snaith’s vocal maturation which shines on standouts like the delicate falsetto tenderness of “Odessa”. But old school fans who loved the depth of his instrumental work needn’t worry, with tracks like the trance-inducing, prayer bowl-sampling “Bowls.” Electronic collages of sound built for the lawn and for the dance floor…sounds like a perfect night for (yet another) night out at Downtown Sound: New Music Mondays! (Duke Shin)