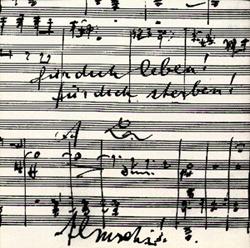 From the last page of Mahler's draft manuscript of the Tenth

Gustav Mahler’s 150th birthday anniversary is July 7 this year and the rest of the world is celebrating in a big way. Curiously, in Chicago, home of one of the world’s finest Mahler orchestras, one that during the pre-Muti era made Mahler its bread-and-butter repertoire, the event is passing by virtually unnoticed, with only a single movement of the Mahler Tenth Symphony to be heard to mark the occasion.

Even more bizarrely, that single movement is being touted by Ravinia as the culmination of James Conlon’s multi-year complete Mahler cycle which was originally to have had a massive encore for the anniversary, replicating one of the Festival’s most daring and memorable seasons when James Levine and a number of conductors—including Conlon—performed all ten symphonies and “Das Lied von der Erde” across a single summer. Welz Kauffman says that idea became cost-prohibitive but that next season will bring “significant Mahler, previously unheard” for the centennial of Mahler’s death.

As for only doing a movement of the Tenth this year for the 150th Mahler birthday anniversary, Kauffman is quick to point out that Ravinia celebrated early by presenting two of the symphonies every summer virtually since Conlon took over the music directorship five seasons ago, and that doing the Adagio from the Tenth this year offers some space between those performances—which included performances of the Ninth and “Das Lied von der Erde” last season alone—and next season’s major Mahler offerings.

So why not a complete performance of the Tenth, which Mahler finished but did not live to orchestrate? “We considered it,” says Kauffman, “but in the end, we decided to do just Mahler and not someone else’s take on Mahler.” (The Adagio is the only movement of the Tenth that Mahler actually finished orchestrating.)

Having the CSO perform a complete Tenth would be a huge undertaking since the piece has rarely been done here, and Conlon himself has apparently never done it, nor sorted out which version he might tackle if he were to give it a try. Granted, that is not something to experiment with given how little rehearsal time the CSO has to prepare Ravinia concerts, though Kauffman could easily see the complete Tenth being heard by Conlon and the CSO in the future. “I think [Conlon] has it programmed elsewhere, so down the line, who knows?” 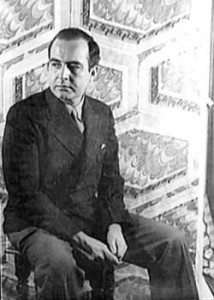 What is amazing, given those rehearsal limitations, is how effective Conlon’s CSO Mahler cycle has been, a cycle more comprehensive than Bernard Haitink’s CSO cycle downtown which despite having so much more rehearsal time never, for instance, attempted the massive Symphony No. 8 “Symphony of a Thousand” that Conlon and company memorably did at Ravinia two seasons ago.

In addition to the Adagio from the Mahler Tenth, the concert will also include another Adagio, Samuel Barber’s “Adagio for Strings,” also a moving work which has memorably been used for countless film soundtracks and for major funerals and memorials, most recently becoming the virtual soundtrack to post-9/11 events. Barber’s centennial is being celebrated this year, and Conlon worked intimately with Barber on the revised version of his opera “Antony and Cleopatra,” which Conlon premiered.