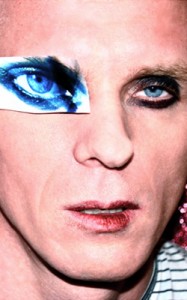 Back in February, Adultnapper and Mr C. returned to their Sycophant Slags collaboration, releasing a dark, sinister gem in “Keep Off.” Featuring the moody and tastefully restrained feel of Adultnapper’s solo work, the track sways with a surgical cleanliness that exposes its eerie minor-keyed tech funk, Mr. C.’s devilishly breathy delivery, and a positive message of pressing on to “have what you want, be who you want.” Mr C. is perhaps better known as the cockneyed rapper/frontman for legendary UK dance band the Shamen during their early nineties heyday (“Move Any Mountain”), but he’s stuck true to the Slags’ lyrics to “just keep on pressing on” as a DJ, producer and co-owner of now-shuttered London destination The End (along with Layo Paskin of Layo & Bushwaka!). With his rock-star past and hedonistic lyrics, it’s convenient to paint Mr. C. as the wildcard, with his Slags partner in alliterated crime, Adultnapper, as the brains. A former indie/punk kid turned on to the ambient and IDM side of electronica, Francis Harris has always materialized his passions, from collecting books and records, to playing in bands and organizing shows, and following his intellect into pursuing a PhD in philosophy. While he might have stopped short of earning his doctorate degree, Harris thankfully created Adultnapper to be his nameless, enigma-laden outlet for heady techno, both complicated and restrained to the cerebral low 120s. With both men primed to take the decks tonight, you can be sure to be hit with something that finds your dancing fancy between the manic energy of Mr. C and the refined, stark complexity and surprising tunefulness of Adultnapper. Also appearing: hustling Chicago favorite Jason Patrick. (Duke Shin)