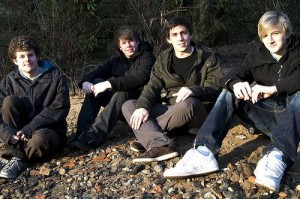 Aside from boasting one of the few sentence-length band names that isn’t annoying to pronounce, Scotland’s We Were Promised Jetpacks also make relatively ear-grabbing pop/rock, occupying the space somewhere between Band of Horses’ echo chambers, Arcade Fire’s orchestral grandeur and Frightened Rabbit’s overt Scottishness. (In all seriousness, lead singer Adam Thompson’s noticeable accent provides a quirky trait no American band could fake.) The group’s newest EP, “The Last Place You’ll Look,” is a melancholy collection of tracks that become stirring, dramatic and cello-packed in all the right spots, swelling with ethereal guitars and sweeping strings. While Thompson’s mopey lyrics often come across as melodramatic—and maybe even a little passé at this point—ultimately his bandmates bail him out with tight delivery, action-packed rhythms and chiming riffs, making them a prime future candidate for a U2 opener. (Andy Seifert)