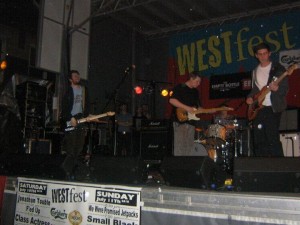 They may have been promised jetpacks, but all we want is a good time and something to distract us from the pouring rain. Sunday night at the West Fest and people are gathering in front of the stage at Chicago and Damen. Some have just arrived, some linger from the last set and others are just getting wasted. We  wait with excitement and frustration for the last band of a  two-day festival but it is raining, umbrellas are in the way and it is past 8:30pm. Personal space is getting scarce as more and more people fill up the street. Those of us who got here early are starting to get impatient.

Four guys make up Scotland’s indie-rock band, We Were Promised Jetpacks: Adam Thompson (vocalist/guitarist), Michael Palmer (guitarist), Sean Smith (bassist) and Darren Lackie (drummer). Their debut album, “These Four Walls,” was just released in June 2009 with a follow-up EP, “The Last Place You’ll Look,” released in March of this year. Though it’s hard to compare their unique sound to other bands, it’s not too far-fetched to hear shades of The Strokes and Bloc Party  in the guitars, bass and drums, but the singer has a completely different voice, not to mention a Scottish accent.

The guys finally come on stage and people start screaming. Not only is the wait finally over but the rain has begun to subside. As they test their instruments once again and the singer, Adam, checks the microphone, his Scottish accent fills the air. Soon a recording of a woman reciting a random countdown indicates the opening of “A Half Built House,” from their debut album, which is quickly followed by “Keeping Warm,” also from their debut. The song slowly builds up and then there is silence as Adam sings into the mic: “Chances of being born / So slim / So keep warm / So keep warm.” Any remaining frustration and anticipation still felt in the crowd is released when the rest of the band joins in to assert the mood of the upbeat, chunky rhythm of the song.

The air smells like rain, alcohol, cigarettes and weed. As the band plays, things get a little out of hand. In the front row, two clearly drunk guys start pushing the fence; one is attempting to climb it. West Fest security guards come up in front of the crowd and hold the fence that is being pushed by the jumping and

moshing of the half-drunk audience. One of the drunken guys is trying to be friendly with the guard, who can’t help but laugh as he shakes his head. Another security guard brings sand bags to hold the fence down. This does not, however, stop the drunk guys from pushing the fence—or the people around them.

The band plays “It’s Thunder and It’s Lightning” and “This is My House, This is My Home.” Then the crowd goes absolutely crazy over the infectious “Quiet Little Voices.” The crowd sings the simple chorus, “Quiet little voices / Quiet little voices” followed by a melody of “ohh’s.” The head-banging rhythm and melodies of the music is empowering, even for those who don’t know much if anything about the band. Even the security guards are stomping their feet.

After an hour of fun, it sadly has to end. Adam, Michael and Sean leave their instruments on the stage as they keep blaring out noise. The drummer, Darren, keeps playing for a bit; he ends the show. Then off they go to the Darkroom, a club just about three blocks away, where Adam says they will “drink beer then dance like this with your hands [waving his arms side to side]” with anyone who wants to come join them. (Genesis Galva)