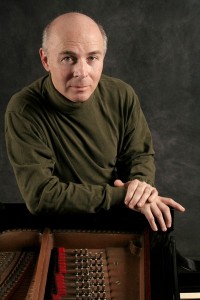 Last month’s downtown Beethoven Festival that had departing CSO principal conductor Bernard Haitink traversing all nine of the Beethoven symphonies across three weeks of concerts gets a magnificent and compact summer cadenza at Ravinia with a rare and wonderful opportunity to experience all five Beethoven piano concertos across two consecutive concerts.

Mexican-born pianist Jorge Federico Osorio, who has long made Highland Park his home but who had to prove himself the world over before being taken seriously as a rank concretizer  of choice here will be the soloist, a coup for all involved. Ravinia is loosely attempting to tie in the 200th anniversary of Mexican independence to Osorio’s heritage, but an opportunity to hear a complete Beethoven Piano Concerto cycle with a pianist of Osorio’s caliber needs no such gimmickry and is a major musical statement in and of itself.

Mozart is often credited with creating the piano concerto as we know it, but it was Beethoven who not only gave the orchestra an expanded and eventually a role equal to that of the soloist, but who made the piano concerto a more personal vehicle of self-expression and emotion, marking the transition from Classicism to Romanticism.

Unlike the downtown Beethoven Festival, which presented Beethoven’s symphonies by juxtaposing the familiar and the less familiar in each concert, the piano concertos will be presented in chronological order, beginning with No. 2 (the earliest), No. 1 (the first published) and No. 3 on the Thursday evening, revealing the steps that Beethoven took from expansive Haydn and Mozart-like writing to heading towards Romanticism by No. 3, with Friday night’s concert showing the full-blown results of that revolution with the first true Romantic concertos of No. 4 and No. 5 (“the Emperor”). Ravinia music director James Conlon, a wonderful Beethovenian in his own right, will conduct.  (Dennis Polkow)