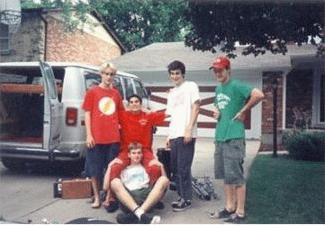 Growing up listening to music, it’s easy to overlook the fact that band members are growing up too. As the years go by, you dust off stacks of albums, listening to them nostalgically, albums like “Analphabetapolothology,” the retrospective collected works of Chicago’s teenage emo forerunners Cap’n Jazz. Guess what: you aren’t the only one interested in playing these songs again.

“I’m not sure who brought it up first,” drummer Mike Kinsella says about the idea of reuniting—their last performance was back in 1995. In the interim, each band member has gone on to be in seminal outfits such as the Promise Ring or Joan of Arc. These days are a bit different from their teenage years. “Instead of being like, ‘We’re going to jump in the van with one change of clothes and play basements around the country’, it’s now like, ‘Well I can only be gone for a few days at a time because I can’t get a full-time babysitter’,” says Kinsella.

Last month, record label Jade Tree released their retrospective album for the first time on vinyl, making it available to a whole new fanbase. ”Obviously the internet helped spread the music and keep it relevant or however relevant a broken-up 15-year-old band can be,” says Kinsella. This new audience is one that probably wasn’t aware of the band’s existence back in the nineties. “Well, considering there were probably only about 100 people that have ever seen the band originally, I imagine most of the faces will be new,” says Kinsella.

The band has since scheduled reunion dates this summer, making sure their hometown was on the itinerary. “It should be super fun to share it with a whole lot more people,” says Kinsella. (John Wawrzaszek)