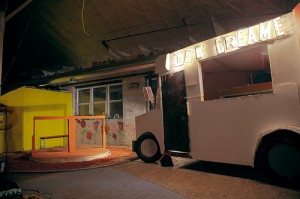 Though Pitchfork markets itself as the budget-friendly music festival of Chicago (and relative to Lollapalooza, it certainly is), Mortville’s Bitchpork puts its bands-per-dollar value to shame. A total of sixty-four acts over the course of three days will play at the Little Village venue, for a ticket price of $12 per day or $30 for a three-day pass (tickets available for purchase at Permanent Records). While the bulk of the bill skews toward noise and punk, there’s a good deal of experimental electronic music to be heard as well. Lineup highlights include headliners White Mystery, Psychedelic Horseshit and Peaking Lights, along with Permanent Records bands like Cacaw and Bitchin Bajas. Add in the value of experiencing Mortville itself (a warehouse currently decorated like a childhood summer fantasy, complete with ten-foot-tall fake trees, playground staples like a swing set and see-saw, and an ice-cream-truck facade for the bar), and the remorse over not paying $300 to someone on Craigslist for sold-out Pitchfork passes will just wash away. As for intrigued Pitchforkers, fear not: the festival runs until about 2:30am each night, leaving you plenty of time to head down from Union Park and still catch multiple acts. (Todd Hieggelke)