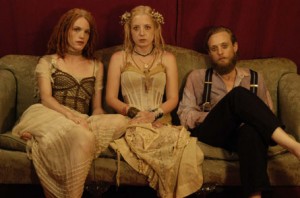 RECOMMENDED
The most immediately striking aspect of Brooklyn’s Rasputina is its brooding, gothic cellos, which make up most of its accompaniment and often teeter between distorted and clean tones. Eventually though, the Victorian-influenced and borderline insane ramblings of lead singer Melora Creager take listeners by surprise, as lyrics like “In this eggshell atmosphere, which is so very thin, 20 thousand million copper needles begin vibrating” beg to be noticed. The group’s newest record, “Sister Kinderhook,” is a loose narrative on colonial federalism, touching on subjects like the existence and immolation of giants (“Holocaust of Giants”), feral children (“Snow-Hen of Austerlitz”), and that old crutch for rock and rollers, the Anti-Rent Wars of 1844 (“Calico Indians”). And all in all, those themes are a pretty fun change-up to some dope mopily groaning about break-ups. That said, it’s that ever-present cello that still defines the group, often gorgeously sweeping around Creager’s vocals, playing several kinds of foil to the melodies—haunting, menacing, or mournful voices that turn bewildering songs about giants and wolf children into compelling Victorian-rock symphonies. (Andy Seifert)
July 25, Abbey Pub, 3420 W. Grace, (773)478-4408, 9pm. $18 (advance), $20 (door).