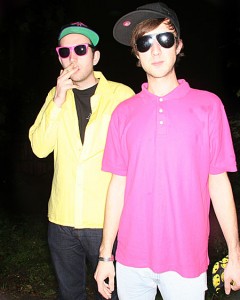 Although cult horror filmmaker George Romero might get all the OG zombie cred, it wasn’t until Dan O’Bannon’s 1985 reboot “Return of the Living Dead” that zombies had the insatiable craving for human brains, memorably crying out “braaaaiiins!” as they chased down victims in a comedic, horror/camp neo-classic. This is in direct opposite to the flat-out terror of Romero’s “Night of the Living Dead,” which initially frightened and shocked audiences back in 1968. Zombie Disco Squad? They are the “Return of the Living Dead” of house music—and I mean that in the best way possible. Think about it. ZDS (Brit Lucas Hunter and German Nat Self) sound like mindless fun, munching indiscriminately through the varied brains of Jesse Rose, Drop the Lime, Groove Armada and Kasper Bjorke with superbly crafted remixes. Hell, they even made Uffie halfway listenable. And as DJs, where so many get deathly serious with their tracks, ZDS’ sets are genius-but-scattershot (and impeccably mixed) selections of banging tech-house, techno and electro house that don’t get bogged down in heady, serious spirals. To that effect, ZDS also manages to skim the best elements of fidget and baile-funk, refining them to the lightest of touches while leaving the grime and audio flatulence behind. But not to be overlooked are the distinctive touches of African tribal drum rhythms that pepper their own productions with the right amount of bump to keep the dance floor reacting solely on the sound. The original re-animators of the dead are rooted in African folklore, and perhaps that is the basis for the duo’s moniker. Or maybe it’s far simpler, since the duo seem capable witch doctors in creating a dance floor of endlessly energized dancing zombies. Whatever the case may be, Chicago will get to bear witness to the effects as ZDS make their debut tonight in yet another stellar first booking for Smart Bar this year. Braaaaiiins! (Duke Shin)