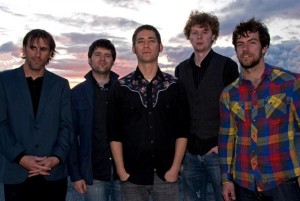 When Rose’s Pawn Shop sets up to play, the stage looks a little confusing. First come the banjo, the mandolin, the fiddle. Then, someone carries out an electric guitar and an upright bass. Finally, a drum set is plopped right in the middle of an all-out instrument arsenal. To further confuse things, a group of Los Angeles-looking twentysomethings stand in front of the crowd and pick up the disparate tools they need to share their bluegrass/Celtic/punk-rock sound. Mixing Hank Williams-like lamenting with Flogging Molly-esque Celtic punk works quite well for the band, especially with their recent win at Billboard’s Independent Music World Series. Rose’s Pawn Shop relies on four-part vocal harmonies, rockabilly speed and lead singer Paul Givant’s voice to make their unique style sound cohesive. The five-piece band–who first found each other on Craigslist—self-released “The Arsonist” in 2006, and are now touring with their second album, “Dancing on the Gallows.” Expect the show to run on high-speed, feel-good beats, but pay attention to the slowdown, when Givant’s twangy tenderness breaks through. (Dee Fabbricatore)