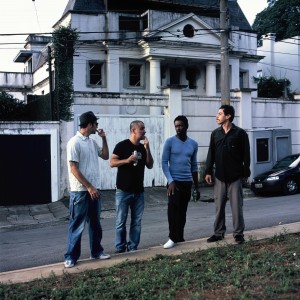 Perhaps you first noticed Seu Jorge in the breathtakingly vibrant and violent film “City of God,” playing peaceful former Brazilian Army sharpshooter turned avenging favela soldier/gang member Knockout Ned. And if not, then most definitely when Jorge emerged next as the David Bowie-covering guitar player aboard Team Zissou’s Belafonte in “The Life Aquatic with Steve Zissou.” But unknown to most Americans was the fact that Jorge was already an established musician in his native Brazil, where he survived ghetto life, violence, addiction and homelessness before being taken in by a theater he slept outside of as a teen. It was there that Jorge began his musical training, and he’d later begin honing his winning formula of mixing rock and funk with homegrown samba sounds, releasing two successful albums in Brazil before Wes Anderson exposed his talent to the world. Jorge is now touring behind his latest project, Seu Jorge & Almaz, a collaboration with three masterful musicians: percussionist Pupillo and guitarist Lucio Maia of Nação Zumbi, and bass player Antonio Pinto, the award-winning composer from “City of God.” They’ve just released their self-titled album earlier this week, and true to expectations, the band covers both likely (Michael Jackson’s “Rock With Me”) and unlikely (Kraftwerk’s “The Model”?!), as well as originals, too. Overseen by famed Brazilian producer Mario C. (Beastie Boys), the record carries a deep, soulful and psychedelic shimmy that makes good use of Jorge’s deep baritone voice and talent for arrangement. With his natural charisma and reputation for engaging live shows, tonight, we get to see how “knockout” Ned really is… (Duke Shin)