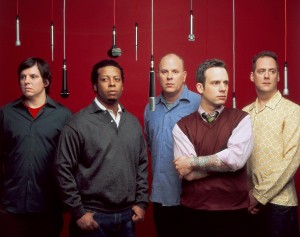 The annual weekly summer jazz series “Made in Chicago: World Class Jazz” makes a welcome return to Millennium Park’s Pritzker Pavilion tonight for six weeks of Thursday night concerts through September 2. Spotlighting Chicago’s leading jazz artists across the spectrum of the genre—from Latin and Big Band to experimental, avant-garde and fusion forms—the series, a collaboration between the city’s Department of Cultural Affairs, the Jazz Institute of Chicago and Millennium Park, will include world-premiere commissions, international collaborations and major artist centennial and anniversary celebrations.

First up is Tortoise, formed in Chicago in 1990 with roots reaching across the city’s jazz, indie-rock and punk scenes and considered pioneers of the post-rock movement. This twentieth-anniversary-year lineup, dubbed Tortoise 2.0, is made up of Dan Bitney on bass, keyboards, drums, percussion and guitar; John Herndon on drums, synthesizer, percussion and electronics; Douglas McCombs on bass, guitar and keyboards; John McEntire on keyboards, drums and percussion; and Jeff Parker on guitar, bass, keyboards, synthesizer and percussion along with special guests for this special appearance that include Ed Wilkerson on reeds; Greg Ward on saxophone; Nicole Mitchell on flute and piccolo; Jim Baker on piano and vintage ARP synthesizer 2600 and Fred Lonberg-Holm on cello and electronics.

As last year’s “Beacons of Ancestorship” (Thrill Jockey Records) demonstrates, Tortoise’s signature instrumental sound, an imaginative and dynamic intersection of Krautrock, dub, dance, jazz, techno, rock, electronica, ambient music and minimalism, remains as fresh and interactive as ever, a creative and clever collage that never allows any specific genre that the group incorporates to overwhelm the proceedings.

Tortoise, which last appeared in Millennium Park in 2008, has been commissioned to compose a world-premiere work for this occasion which will be unveiled as the evening progresses. As will be the case for each “Made in Chicago: World Class Jazz” concert, the evening will kick off with a short set by aspiring young jazz musicians from Chicago area high schools as part of the Jazz Institute of Chicago’s Jazz Links Student Ensembles. (Dennis Polkow)