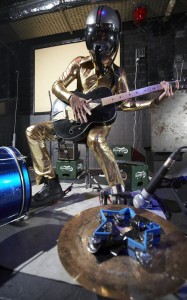 He explains his odd style of dress, which includes a helmet that renders him nearly blind on stage, as “fashion to me is just covering up your nutsack.” He describes his live show as “a guitar party, I play my guitar and try to rile them up and stir them up,” and he thinks of his sound “like a giant ball of noise I take it and throw it at people […] and they throw it back.”

Bob Log III is, as far as one-man-slide-guitar bands go, a singular find. His beginnings are rooted in a band member leaving in the middle of a tour, forcing him to go it alone. It seems to have worked out well, as he brings his raunchy slide guitar rock ‘n’ roll tunes on tour again.

Born in Oak Park, where he remembers accidentally hitting a kid in the head with a Tinkertoy, Log soon moved to Arizona, where he’s lived for most of his life. Now a resident of Melbourne, Australia, Log is traveling again, returning to the States, specifically to Chicago.

So far his tour has afforded him interesting experiences. “Every single day is strange and exciting. For example, last night, I played a bowling alley in Oklahoma City. It was all-ages—I was playing for grandmas and tweens.”

For a man whose songs include topics like women putting boobs in his Scotch and clapping their tits, the experience must have been even more strange and exciting for those grandmas and tweens than it was even for him.

His upcoming show at Schubas should also be a spectacle, even if the concert-goers are of a more logical age for his themes. Log is known to end up with a real-life boob Scotch and invite audience members to sit on his legs, as he uses his feet to play the kick drum and cymbals.

The show and the music is rooted in absurdity, and following in that fashion, what Log, in closing inexplicably wanted everyone to know is: “Make sure everyone realizes: I enjoy science. That’s all.” (Lindsey Kratochwill)