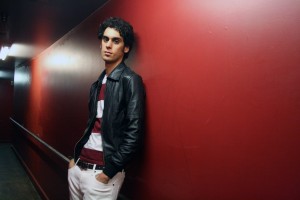 For musicians on tour, the hometown show is the sweetest, since it’s the one place without fail where they can be surrounded by family and friends. For singer-songwriter Adam Bones, returning to Chicago is more like a homecoming. Bones has set up residency in Los Angeles by way of Northbrook. After working for Direction Tour Marketing and Promotion in Chicago, Bones moved to sunny LA and landed a job at the Knitting Factory Hollywood. “You have to have some swagger in LA,” says Bones. ”Maybe it’s all cliché, but it’s the truth. It’s very LA in LA.”

Growing up in Chicago, Bones played in local bands but never really fit into any particular scene. “I went to the different venues and made some friends, but I never felt like I was in a ‘scene’.” Once settled in LA, he was left without a band. His job working at the Knitting Factory quickly guided him to becoming part of the local music scene. “I learned a lot by getting to know and become familiar with the local bands.” The knowledge lent itself to the recording of his new EP, “Feel for Tomorrow.” “I didn’t have a band at the time I recorded, so I had to find and recruit players. That was a process but it all worked out in the end.”

As for the EP, Bones mixes power-pop harmonies with American rock guitar, in a way distinctly his own. This is his first solo project. “I had to make the decisions. It’s all on me. My name is on the cover, not a band name.” Now that it is finished, Bones has toured the west coast and returns to Chicago for the first time in 5 years. “I’m excited about turning people on to the new material I’ve been coming up with,” he states. “I’m really excited to get back up on stage and perform my new material and get their reaction.” The pressure of performing to friends seems not to daunt Bones. “My live show is something I take really seriously. I want to make sure that I put on a show and am entertaining. It is important to me to get back in front of the people that supported my bands when I was in Chicago.”

In the end, his return begs for more than playing live in front of friendly faces. “I miss deep-dish pizza. You can’t get Chicago-style pizza in LA.” (John Wawrzaszek)