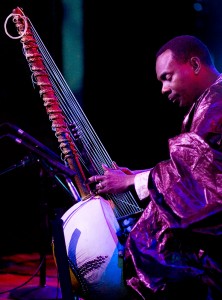 We tend to think of rhythm as the essence of African music, being its characteristic element. That West African rhythms were cross-fertilized with European classical harmonies in America to create the genres of jazz and their stepchildren blues, rock, hip-hop, et al, only serves to spotlight the significance of rhythm as we experience it. And though the kora, the twenty-one-stringed lute-shaped instrument unique to West Africa is played rhythmically—indeed, polyrhythmically—it is the forerunner of the modern guitar as a true chordophone where the player can create harmony as well as fascinating rhythms simultaneously.

No one does this in a more compelling, musical and virtuosic manner than Toumani Diabaté, who is to the kora what Hendrix was to the guitar. Tracing seventy-one generations of griots, or master musical village storyteller’s chroniclers to his Malian heritage—including the “King of the Kora” Sidiki Diabaté (1922-1996)—Diabaté has expanded that village tradition on a global level by communicating his music mastery on a world stage. He also skillfully incorporates rock and pop genres into his playing that extends beyond his African roots and has immensely expanded the technical possibilities of the instrument. Diabaté will be heard on this program as kora soloist and with his own group the Symmetric Orchestra, as well as with Carlos Kalmar and the Grant Park Orchestra accompanying him in a live performance of his 2008 album “The Mandé Variations” (Nonesuch). (Dennis Polkow)