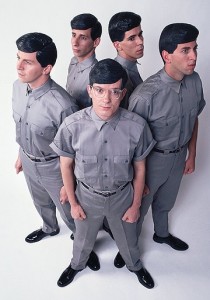 Music venues citywide will be vying for your Lollapalooza-loving heart before, after and even during the three-day music marathon. Thankfully, this year’s official after-show lineup clears up a lot of the schedule conflicts that cause dangerous anxiety attacks (i.e.: Hot Chip vs. The Black Keys, watching The National vs. feeling guilty that you’re not staking a primo spot for the Arcade Fire set, etc).

While the Phoenix concert as the weekend’s nightcap isn’t exactly the thrill Them Crooked Vultures was last year, the French-indie band’s House Of Blues fest Sunday will be a great chance to see one of the festival’s headliners, should you refuse to spend the money on the whole shebang.

The rest of the after-sets continue to represent the bulk of all that is worth seeing of the daytime lineup. What could be a better pre-show than Soundgarden’s last-minute concert at The Vic Thursday night, though tickets are only available through the band’s fan club. There’s also Devo with The Dirty Projectors at The Congress Theater (7:30pm) and Cymbals Eat Guitars with Young Galaxy at Schubas (8pm). On Friday, catch either Cut Copy with Dragonette at the Metro (10pm) or MGMT at the House Of Blues (11pm).

Some shows are already sold out, like Edward Sharpe and The Magnetic Zeros at Lincoln Hall Friday (10pm), Rogue Wave at Schubas (11pm) and The Black Keys with The Morning Benders on Saturday at Metro (10pm). There’s a good chance stray tickets will surface last-minute, so keep close tabs.

Saturday, The National plays with The Antlers at House of Blues (11pm)—the powerful sound of The National’s new CD, “High Violet,” will sound better in an indoor venue. Hot Chip with Perry Farrell is an equally viable option at Congress Theater (10pm).

Now with all these options, the space that just freed up in your Lolla day planner just got displaced by some serious nighttime decisions. Break the cold sweat and get to gridding. (Dee Fabbricatore)

Visit music.newcity.com to check out our short film, “The Pitchfork Experience 2010,” to get back into the festival mood.