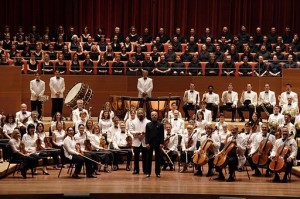 Dvorák is best known as an orchestral composer who wrote bright, Czech-influenced “Slavonic Dances,” symphonies, a memorable cello concerto and chamber music, but the Dvorák who wrote the large-scale choral work “Stabat Mater” represents a more introspective and meditative side of the composer, a man who lost three children within the first four years of his marriage. Turning to the famous medieval poem that portrays the grief of Mary at the foot of the cross of Jesus, Dvorák found setting the text with four soloists and a full chorus and orchestra an expression of his grief.

That work cemented Dvorák’s international reputation and a follow-up commission emerged from England to set a specific text for the same forces, Cardinal John Henry Newman’s “The Dream of Gerontius,” which Elgar would later set and which the Grant Park Orchestra and Chorus performed last season. Dvorák rejected the text and preferred instead a setting of the Catholic Requiem Mass which afforded him the opportunity to offer a contemplative alternative to the bombastic settings of the same text by Berlioz and Verdi.

It is a work that is rarely performed and has a moving effect on both performers and audiences, despite its length of almost ninety minutes, and should provide an extraordinary showcase for the Grant Park Symphony Orchestra and Chorus along with soprano Layla Claire, mezzo-soprano Alexandra Petersamer, tenor Brendan Tuohy and bass Kyle Ketelsen and conductor Carlos Kalmar. (Dennis Polkow)