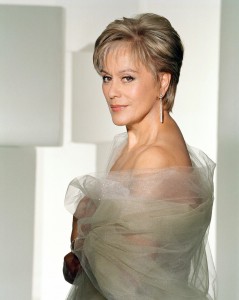 Because New Zealand soprano Kiri Te Kanawa was a protégée of legendary Chicago Symphony Orchestra music director Sir Georg Solti, Chicago has heard this once-reigning diva at virtually every stage of her career. That included a gala “farewell” two years ago with the orchestra so long associated with her. As reported then, no one says it’s over until the diva says it’s over, and in this case, since Te Kanawa is still in superb voice, she is giving us something as an additional “farewell” that was a real rarity when she was in her prime: an intimate recital.

Among the highlights of Te Kanawa’s many performances here was the glorious Mahler Fourth that she performed and recorded here under Solti and the CSO, and no less than two performances of Desdemona in Verdi’s “Otello,” –one for Solti’s seventieth birthday gala in 1987 with Placido Domingo, another alongside for the first and only time that Luciano Pavarotti ever sang the role for Solti’s own “farewell” performances as CSO music director in 1991, where Te Kanawa sat onstage traumatized by the fact that Pavarotti was attempting to camouflage eating entire chickens onstage when he wasn’t singing and was tossing the chicken bones on the floor next to her. But hey, while Te Kanawa was rehearsing for the world premiere of “Paul McCartney’s Liverpool Oratorio” at Liverpool Cathedral, she freaked out the former Beatle when she began actually scolding tourists who were in her line of sight yards away, asking them to “move along” as if she owned the place. Late and mischievous tenor Jerry Hadley thought the whole thing was hysterical and was doing his best to keep a straight face. Ah yes, they don’t make divas like this anymore.