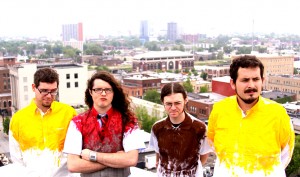 Elsinore recorded their first LP very, very slowly. It took two years and plenty of University of Illinois house-party gigs for the pop quintet to assemble a record out of their singular catchy songs. Released two weeks ago and co-produced with Adam Schmitt and mastered by Jon Pines (who has also worked extensively with Wilco), the band is looking to finally break free from their Champaign-Urbana bubble. Taking cues from modern-day influences Ben Gibbard and Sufjan Stevens, Elsinore enthusiastically cranks out punchy choruses and well-timed harmonies. Call it power pop with a killer falsetto. Though Elsinore is the headliner, Canasta is an equally great (if not better) reason to check out Lincoln Hall Friday night. The Chicago-based orchestra-pop band seems to have been on the verge since 2002, when it was founded by male/female duo Matt Priest and Elizabeth Lindau. They’ve cycled through fifteen members and gotten some mainstream attention—sound bites in a feature film, TV commercials and a spot on NPR’s World Café—but always seem to be a bit under the radar. Which is surprising, considering their New Pornographers-duo sound matched with a Midwestern alt-country feel. The band was at Lincoln Hall earlier this year with Mucca Pazza, but the marriage Friday night between both Elsinore’s and Canasta’s nuanced pop will be a holy experience. (Dee Fabbricatore)