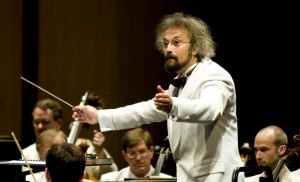 Ten seasons ago when Carlos Kalmar was made principal conductor of the Grant Park Music Festival, hearing Mahler performed by the Grant Park Orchestra was a rarity. But one of Kalmar’s earliest concerts here was a stunning performance of the Mahler “Resurrection” Symphony No. 2, and it was that extraordinary concert that led to his being hired for the post. Kalmar, who was born in Uruguay to Austrian parents and had his musical training in Vienna and spent his early career conducting in Europe, admits that he had never heard of the GPO when former artistic director James W. Palermo first invited him to guest-conduct here back in 1998. “I expected that a city the size of Chicago would have a ‘good’ orchestra,” Kalmar recalls, “but they were so immediately responsive.” Palermo asked Kalmar back the following 1999 season to conduct the Mahler, and neither he nor the Grant Park Orchestra have ever been the same. “I didn’t know it at the time,” says Kalmar, “because I didn’t even know they were looking for someone [to become principal conductor], but that became my ‘audition’ piece. Well, if you can’t get a reaction from a piece like that, you’re not much of a conductor!”

There have been several Kalmar/GPO performances of Mahler since—including last year’s memorable season-ending Harris Theater traversal of the Mahler Ninth—but no more than one work per season, tops, mainly because of the huge amount of rehearsal time that these gargantuan works need to be properly prepared. The occasion of Kalmar’s tenth anniversary as principal conductor and the transformation of that position to where his responsibilities are truly emerging as that of a bona fide music director if not in title but in practice; that is, Kalmar, not an administrator, is now making the major programming decisions for the festival, is celebratory cause for pause to look back at where the festival has come under Kalmar, as well as where it is going. As such, Kalmar and the GPO and Chorus are returning to where it all began to close out this year’s festival, i.e., the Mahler “Resurrection” Symphony No. 2, the first time ever that the mammoth work will be performed in the Pritzker Pavilion (the 1999 performance was before Millennium Park was built and took place in the old Petrillo Music Shell).

From its ferocious death-march movement that had initially served as a symphonic poem all on its own to its yearning “Urlicht” setting for mezzo soprano (Allyson McHardy) to its subdued, almost anti-Verdi “Requiem” portrayal of the last trumpet with its slow, steady and hauntingly beautiful Great Summons’ brass fanfare to the hushed, almost inaudible use of low chorus that will serve as a spectacular showcase for Christopher Bell’s also extremely significant important work with the Grant Park Chorus as it soars heavenward (with help from soloists McHardy and soprano Karina Gauvin) in one of the most thrilling climactic tension and release build-up and resolutions in all of music, it would be hard to imagine a more fitting nor thrilling crown to Kalmar’s first decade at the helm of the country’s largest remaining free classical music festival. (Dennis Polkow)