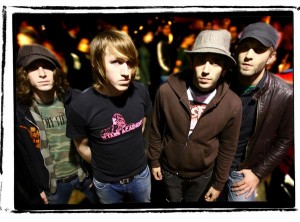 The summer is a time for spending time with friends and having fun. Maybe that’s what inspired the members of Chicago pop-rock band Spitalfield. “I think the timing felt right to put together a concert,” says vocalist and guitarist Mark Rose. “We had kicked around the idea of doing something for a while, and the end of this summer seemed to be the right time for everyone to make it happen.”

The band of Glen Ellyn natives began playing in 1998, forming out of high-school friendships. “We relocated to the city post-high school to start college and try to take the group to the next level,” says Rose. Shortly thereafter, they got noticed by local hardcore label Victory Records. After producing three albums for the label and touring in support, they decided to disband, playing farewell shows in late 2007. Since then, Rose has played solo shows as a singer/songwriter under his name.

Through it all, Rose recalls, “We’ve remained good friends, and will always have a soft spot for that chapter of our lives.” That closeness undoubtedly fueled their idea to reunite. “It’s a very nostalgic kind of thing,” Rose says. Planning the show is only half the battle. “It’s also a bit of a challenge to remember how to play and sing all of the songs we’ll be performing,” jests Rose.

These shows will not be a mere trip down memory lane for the band, Rose says. “These shows will be for us, and for everyone who had supported us and our music for so many years.” Spitalfield’s fans from Chicago, those who once packed their shows, can look forward to a treat. “Our hometown fans have always brought out the best in us,” says Rose, “and I think these reunion shows will be no exception.” (John Wawrzaszek)