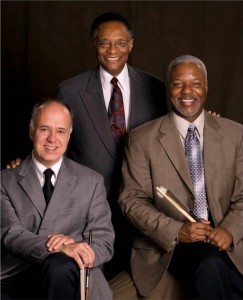 Legendary jazz pianist, composer, bandleader and broadcaster Ramsey Lewis has become a familiar presence at Ravinia in recent years, where he serves as jazz advisor to the North Shore summer music festival and is also the founder of its year-round Jazz Mentor Program. Performances within Chicago city limits have become far fewer for the Chicago native, however, and in fact, Lewis has not played at a downtown venue in over a decade, and last appeared at the Chicago Jazz Festival over a quarter of a century ago, back in 1984.

Performing with longtime collaborators Larry Gray on bass and drummer Leon Joyce as part of this year’s 32nd annual festival to celebrate Lewis’ seventy-fifth birthday—which was May 27—this unusual downtown concert marks Lewis’ Millennium Park debut and is the Ramsey Lewis Trio’s first-ever free Chicago concert. “This concert is a gift to my hometown—the city that has nurtured me and inspired me my entire life,” says Lewis in a press statement. “We are thrilled to perform at the Pritzker Pavilion surrounded by the vibrancy and awe-inspiring grandeur of the most beautiful city in the world.”

Included on the program will be a sneak preview of Lewis’ newest project, “Colors: The Ecology of Oneness,” a seven-movement jazz suite that will receive its world premiere in Tokyo later this month, as well as selections from recent Ravinia premieres, including “To Know Her,” a ballet scored by Lewis and commissioned by the Joffrey Ballet in 2007, and “Proclamation of Hope,” his eclectic 2009 Lincoln bicentennial symphonic suite that is being taken to the Kennedy Center in Washington, D.C. in November.

Lewis has always been an eclectic performer, gaining fame initially as a child prodigy performing classical music and as a gospel performer before turning to his own unique style of jazz that spotlighted his musical diversity and that topped even the pop charts in the mid-1960s with mega-million-seller hits such as “The In Crowd,” “Hang On Sloopy” and “Wade in the Water.” More than eighty albums later, Lewis is also the recipient of the National Endowment for the Arts Jazz Masters Award, four honorary doctorate degrees and numerous other accolades, including seven gold records and three Grammy Awards. Still, despite Lewis’ continual attempts to broaden out from his jazz base, it is his trio and jazz work that remain his signature sound, and which will be the primary focus of this rare and free downtown appearance. (Dennis Polkow)