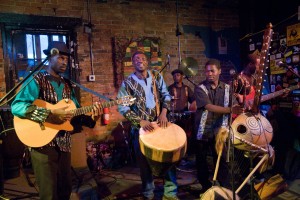 The story goes that before Herbert Kinobe was born in his native Uganda, his uncle prophesied that the child-to-be would become a great musician. By the age of five, Kinobe was playing such traditional African instruments as the kalengo, or “talking” drum; the kora, the 21-stringed harp-lute; the kalimba, or thumb piano; the adungu or bow-harp; the endongo, or African lyre, among others. By the age of ten, child prodigy Kinobe was giving virtuoso performances of Ugandan music as well as his own compositions at festivals in Europe and across the African continent, performing along the way with such who’s who of African musicians as Miriam Makeba, Ali Farka Toure, Toumani Diabate, Youssou N’Dour, Salif Keita, Angelique Kidjo, Oliver Mtukudzi, Baaba Maal and Ismael Lo, among others. Those early travels opened up Kinobe’s ears to music of the West and to other styles of African music beyond Uganda and it became an obsession for Kinobe to combine traditional African instruments and styles with other international styles and rhythms, particularly of the Latin and American variety. Even so, Kinobe is quick to point out that these styles have Africa as their ultimate starting point which is why he genuinely prefers the broad label “World Music” to African music.

Soul Beat Africa is one of several Kinobe projects, the mouthpiece of a “new groove for a new world” that seeks to be truly international cultural ambassadors and which will open the 2010-11 Jewel Box series at Northeastern Illinois University, a rare opportunity to experience this unique band in an intimate concert-hall setting. The lineup includes guitarist and multi-instrumentalist Ouma Michael, keyboardist and kalimba-player Lukwago Jude, Okia Allan on bass guitar, bass kalimba and back-up vocals, Sewagudde Richard on calabash, kalimba, endongo and adungu, drummer Tugume Ambrose and percussionist Bakkabulindi Samuel. (Dennis Polkow)