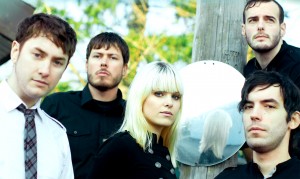 Chicago’s pop-punk stalwarts the Scissors have been belting out tunes since early 2002. Eight years later, they are settling into their own, releasing a new album while solidifying a change to their lineup.

Last year they introduced members Ken Fletcher on bass (who played in Chicago’s Plain White T’s) and Yvonne Szumski on guitars and vocals (who was in local all-female outfit the Groodies). The band began writing new material and touring as soon as they could. “(Things) worked out perfectly and we’ve been going strong with this lineup for quite some time now,” says vocalist Darren Vorel, who’s been able to put down his guitar and pick up the microphone full-time thanks to the band’s new additions.

This spring, the Scissors self-released their newest album, “You Can Make It Dangerous,” engineered by Matt Allison at Atlas Studios. “We took our time writing and recording it, probably about half a year writing and half a year recording,” says Vorel. The album showcases their newest members’ musicianship as well as songwriting skills. “Adding Ken and Yvonne has greatly changed the dynamic of songwriting,” says Vorel. “It’s pretty rare to write something that doesn’t have all of our names on it. Now there’s two more heads in the mix.” When it came time to release the album, it made the most sense to them to put it out on the band’s own terms. “We could control more of the label operations,” says Vorel. “Why not try and do it yourself if you can?”

With their lineup gelling and a new album as a springboard, the band is embarking on a fall tour, kicking it off at home. “We really want to get our music in front of people,” says Vorel. “We want to show up and play hard, something that the Internet can’t offer.” The Scissors’ quintessential Chicago style, a la Smoking Popes and Alkaline Trio, has been perfected to their growing hometown fan base. “It’s always packed with friends, fans, and people that get a chance to hear us for the first time,” says Vorel. “It’s really exciting and powerful to be part of. We’re going to take that energy with us to every stop on the tour.” (John Wawrzaszek)

They sound like a great band! The comparison to Smoking Popes and Alkaline Trio sounds lovely! Interesting to know that an ex-Plain White T is in the band too.