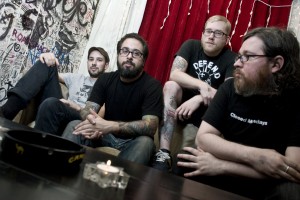 In every font, there is a part of the letter, such as on a lowercase y or a g, that hangs like a tail below the base line. The typographic term for this is called a descender. So when four Brooklyn graphic-designers-turned-musicians-by-night decided to name their band, it made sense when they settled on this term.  The band’s drummer George Manolis is a born-and-raised Chicagoan who now finds it a bit different playing music in New York City. “None of us own a car,” says Manolis, “so we get a Zipcar van for every show. Even though it’s expensive to play in a band in New York, it’s definitely worth it.”

Growing up in the Chicago punk scene, Manolis worked at Chicago clubs like the Fireside Bowl and Bottom Lounge. In Descender, Manolis see the view from the side, playing on stage instead of working the door. Taking up residency in Brooklyn’s Bushwick neighborhood, he only has viewed that scene from this new perspective. “Some of my favorite shows here have been house or loft shows,” says Manolis. “DIY spaces remind me of going to shows at Fireside, where people are enthusiastic about the music and are out to have a good time.” Descender has been carving out its own name, bringing its mix of hardcore and metal to such spaces. “In the last few years I have noticed heavier bands and bills have been much more prominent in the Brooklyn scene,” says Manolis. “It’s hard to generalize the New York music scene (into good or bad) because there are so many different kinds of bands, clubs and promoters.”

Descender is taking its first trip out to the Midwest in support of its debut self-titled EP. “We recorded an EP last summer and put it online for free,” says Manolis. “It was getting a decent response so earlier this year we decided to master it, press it and release it DIY on our band-created label Aqualamb.” The record showcases the band’s mix of hardcore, sounding like Helmet if they released an album on Victory Records in the 1990s. It also has some decent artwork, but what would you expect from a band full of professional graphic designers. As for the tour, Manolis says, “I wanted to make sure we included Chicago and the Midwest.” When coming back for visits, he calls upon old haunts to welcome him back. This time he travels with a band, becoming tour guide to his second city. And what trip to the windy city would be complete without some good food? His list is like a line out of his favorite Chicago song, ‘Denehy’ by rapper Serengeti. “I would be happy with any of the following: Hot Dougs, Al’s Beef, Giordanos or Artopolis in Greektown.” (John Wawrzaszek)