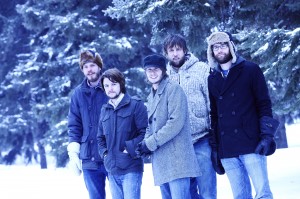 The Deep Dark Woods sound like winter. And while perhaps Chicagoans don’t want to be reminded that the season is creeping up, somehow the brooding, folksy Saskatoon, Saskatchewan band helps to remind us of the goodness of wrapping up in a warm sweater as the wind whips outside.

Geoff Hilhorst, the pianist/organist and newest member joined up in April of last year, though the band itself is relatively new to the scene, just starting in 2005.

But the group has seen a swift success, receiving nominations and awards from the Western Canadian Music Awards and the Canadian Folk Music Awards.

Though just a little ways to the south, playing in the States has been a bit more difficult but motivating experience.

“It doesn’t necessarily feel different, it’s just when you play up in Canada, obviously a lot more people have heard of you,” Hilhorst says. “Going down to the States is kind of like a fresh new audience.”

But after making friends with music bloggers Hearya and Shirk Music and Sound, Chicago is becoming a welcome destination. The Deep Dark Woods played at Hearya’s SXSW party and have gotten a lot of support from the mainly Chicago-based blog.

“Not to cut down Canada at all, because we obviously love it, but it’s more exciting and challenging to play down in the States. We play even harder down there […] we feel like we have more to prove,” Hilhorst says.

The beautiful mix of vocal harmonies and complex instrumentation are easy to get lost in on the record. But live, the band produces something that “doesn’t necessarily sound like what you listen to on the record.”