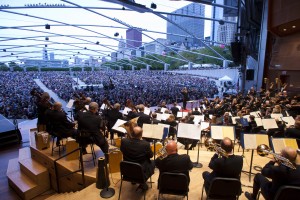 Not since the Chicago Symphony Orchestra triumphantly returned from its first European tour some forty years ago and then-mayor Richard J. Daley hosted a parade in celebration has the CSO so dominated an event downtown.

Hopefully, you came early, because if you hadn’t, spaces were few and far between across a Millennium Park that eventually became so crowded Sunday afternoon, September 19, that the park was shut off to additional concertgoers.

“What a great day to be a Chicagoan!” exclaimed co-sponsor Bank of America’s Paul Lambert, to a sea of people waving small flags proclaiming “Festa Muti” so ferociously that if the celebrated Italian maestro were running for mayor, he would be a shoo-in.

Could the performance itself possibly live up to all of the hype and anticipation? By the time Riccardo Muti actually showed his face for the first time to the vast crowd as the tenth music director of the Chicago Symphony Orchestra, the crowd stood and went as ballistic as if Bono had walked onto the stage.

The 69-year old maestro—sporting a double-breasted dark suit, polka-dot dark tie and thin eyeglasses with his customarily tame dark mane swaying in the afternoon breeze—walked with a clear sense of purpose over to the podium and signaled the start of “The Star-Spangled Banner,” and then turned to face an audience singing along to his sweeping and elegant gestures.

The first official music to begin the Muti era was a piece long associated with him, Verdi’s Overture to “La forza del destino” [“The force of destiny”], which in a sense can be seen as the theme that brought Muti to Chicago, coming as he did so unexpectedly in the wake of his surprise departure from La Scala after nearly two decades there and after it was so widely speculated that he would accept a post at the New York Philharmonic, which Muti would turn down to come to Chicago.

Curiously, this Verdi tour de force was the first music that Muti chose to conduct with the CSO when he came here in 2007 after a nearly thirty-year absence, but this performance was much more polished, dramatic and nuanced. By the time Muti and the CSO reached the very soft section right before the shift from the minor to the major key, the rare quiet and audience engagement across the park was truly impressive, though after the climatic build-up, tension and concluding release, the crowd went wild. 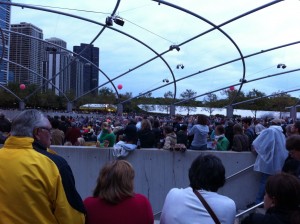 Liszt’s tone poem “Les préludes”—another short piece about fate that Muti has also programmed inside Symphony Center next month and which features a similar build-up and release and shift from melancholy to optimism—seemed like a variation on the theme established in the Verdi, but was nonetheless spectacularly played.

The most recognizable piece on the program was Tchaikovsky’s Overture-Fantasy “Romeo and Juliet” based on Shakespeare, a shrewd programming choice on Muti’s part, for the work not only showed off the orchestra’s ability to shimmer softly, but when the famous “love theme” emerged, there was a nod of delight and recognition from even those attending their first orchestral concert.

Particularly inspired was the decision to place children that had performed all afternoon in the park on the choral risers onstage so that they had a close-up view of Muti conducting, and the audience had a view of them delighting in the sonorities.

Respighi’s “Pines of Rome” is no stranger to the repertoire of the CSO: Fritz Reiner made a memorable recording of the piece with the orchestra half a century ago as a showcase for then-still-relatively new stereophonic sound and James Levine recorded it digitally with the CSO for use in the opening sequence of Disney’s “Fantasia 2000” a decade ago.

Muti decided to use the full length of the Millennium Park stage by placing the horns and the trombones at its opposite ends. With the vastness of forces assembled tamed so precisely, the effect was a stunning soundscape, particularly the finale where the ghostly gallop of Caesar’s legions are heard in the distance and gradually increased to an immensely thrilling climax that was topped off by fireworks where the park was suddenly engulfed by simultaneous white streamers punctuated with red and green reports. Now dark, even the Chicago skyline was spelling out “Muti” and “CSO.”

Having now let his music speak for him and obviously moved by the ovation by so many natives of his newly adopted city, Muti took a microphone and publicly thanked everyone for such a warm welcome. He turned to the children in the choral risers and thanked them for their “very good” rendition of the Italian national anthem, and hoped that his own performance of the American national anthem “did not disappoint” them.

Turning to the immense crowd, Muti said, “Thank you very much for coming. We have made music for you and the fact that so many are here means that you realize that you have a fantastic orchestra,” he said. “Stay close, be very proud of your orchestra. Music directors come and go—well, it’s too soon for me to go just starting—but the glory of the orchestra is your future. And as wonderful as music is in the fresh air, it is even better in the concert hall.”