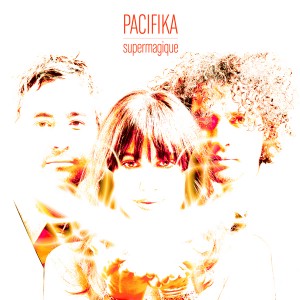 On their sophomore release (which follows up on 2008’s “Asuncion”), the multinational trio formed by Silvana Kane (vocals), Adam Popowitz (guitar) and Toby Peter (bass), continues to push their clever blend of pop, soul, Latin alternative and Eastern music. Their sound brings together tablas, African drums, electronics and indie-music sensibilities into one cohesive package, and the result is often surprising.

“Supermagique” kicks off with “Close to Everything,” an electronics-laden ballad. The group turns the heat up with the bilingual stomper “Chocolate” and “Ana Maria,” a Cumbia-inspired, percussion-rich tune that is sure to hit World Music-friendly dance floors around the world. The title track is also impressive, with its multi-layered vocals and compressed drumming. Peter’s bassline holds everything together, while Popowitz’s U2-inflected guitar riffs give the track a special edge (pun intended).

While most tunes have a more uptempo feel, slower moments like the French-language “La Matin” are also impressive. Peter clearly borrowed from prog-rock players like Chris Squire here, adding inspired lines where less-gifted musicians would probably have gone for something simpler. It is clear that a two-year layoff between albums was helpful, as there are no duds here. Every track is a small gem with great sonic discoveries along the way, which makes it the end-of-summer disc to have. (Ernest Barteldes)