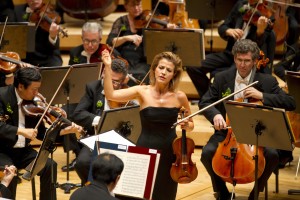 Attentive concertgoers who were not out in the hall sipping the complimentary champagne may have noticed something a tad unusual at last Saturday evening’s Chicago Symphony Orchestra black tie “Symphony Ball” with Riccardo Muti: a chair had been placed on the conductor’s podium.

The starting time of 7pm came and went, a late start, everyone surmised. Finally, at 7:10pm, CSO Board of Trustees chair William Osborn came out and announced that the concert would be delayed “about ten minutes,” that there was “a situation backstage that we are dealing with, so please be patient.”

Heading out for more champagne, two CSO publicists I met along the way told me that “the Maestro was not feeling well,” but was expected to go on. As stagehands walked out and began placing new music on the stands to applause from impatient concertgoers, it was clear there was to be a change in repertoire, at the very least.

At 7:35pm, a pale and worried-looking CSO president Deborah Rutter came out and said that “it is with deep regret that Maestro Muti will not be appearing this evening.” There was an audible sound of disappointment before Rutter continued in a somber tone: “He came to the hall and had every intention of performing, but is not feeling well. Despite his best efforts to come out and conduct for you, he is simply unable to find the strength to be able to do so and is deeply disappointed.”

“However,” Rutter said, changing to a more optimistic tone, “the musicians are ready to appear for you and do not want to disappoint you, so we will have music tonight.” By now, there was audible rumbling as to how that would be possible, as Rutter explained that “a situation like this shows just what a remarkable ensemble this is,” and that the musicians would perform “conductorless but led from the stand by concertmaster Robert Chen,” but that the program would change: the planned “William Tell” Overture and Liszt “Les preludes” would be replaced with the Mozart Symphony No. 34 in C Major, K. 338, though the Beethoven Violin Concerto with German violinist Anne-Sophie Mutter would stay the same. “The musicians are dedicating the performance in honor of Maestro Muti.”

The full orchestra, which came onstage as a group to gradually increasing applause—with Chen entering on his own as is customary for a concertmaster—took a scattered bow at Chen’s prompting, tuned up, and then began “The Star-Spangled Banner” on a cue from Chen. Ironically, it would be the only time that the full group would be seen and heard all evening, since the pieces requiring vast forces had been cancelled.

Nearly half of the players left the stage and the chamber orchestra that remained began scrambling and scrunching to have the best possible view of Chen from his stand. Once everyone was in place, Chen counted out and signaled with his bow for the downbeat, and the orchestra began performing the Mozart, the shortest of four pieces heard on that week’s subscription program which Muti had conducted on Thursday night and Friday afternoon in what turned out to be the final concerts of his fall residency.

What resulted was a rather ploddy and slow performance, with little nuance or detail, minus someone able to sculpt the sound in real time. Muti had shown a preference for Mozart performed with a larger string section than is now customary, and with a decidedly nineteenth-century rather than eighteenth-century approach, an effect that was further exaggerated without his presence.

After the three-movement work concluded, a stagehand placed a music stand and music where the conductor’s podium would be, a few additional players came out, followed by Anne-Sophie Mutter in a sleek, strapless black gown fringed with red flowers, greeted with applause. She looked at the score intently and began beating time for the orchestra to begin the Beethoven Violin Concerto, a work that she has played since she was a teenager, and had even performed with the CSO during a similar opening night with then-music director Sir Georg Solti twenty-one years ago.

With Mutter giving as much attention to keeping balances and holding things together as she was playing her own solo part, she was unable to put as much into her own performance as we have come to expect, yet this was nonetheless in its own way a remarkable performance, almost chamber music-like in overall effect. There was none of the tension and release that one would get with past Mutter collaborators on this work such as Karajan or Solti, and lots of tentative playing from all sides, and yet, hers was a heroic effort rather than sending everyone home.

An improvised, very slow encore of the middle movement from the Bach Double Violin Concerto with Chen and Mutter both serving as soloists capped off the evening, Mutter hugging her collaborator at the work’s conclusion and both subsequently presented with roses.

Late Sunday afternoon, a press release went out announcing that Muti had “been forced to withdraw from the remaining performances of his inaugural residency due to illness” and said that he was “suffering from extreme gastric distress and must fly back to Milan to consult with his doctors.”

“I cannot express the depth of my regret that I am unable to complete this first residency as music director,” Muti was quoted in the release. “I have had the privilege of making marvelous music together with this great Orchestra, and I am confident that we will continue to do so when I return again,” in scheduled concerts for February 2011. “I want to thank the Chicago public that has given me such a warm welcome, one that I have felt in my heart. This has touched me very deeply. I most respectfully ask that the CSO’s dedicated audiences continue to show their great support of the Orchestra as you have shown such wonderful support of me.”

Two of the three Muti programs remain unchanged: Tuesday, October 5’s program will feature the same symphonies by Haydn (Nos. 39, 89) and Mozart (Nos. 25, 34) as last week but will be led by early music conductor and English Concert music director Harry Bicket, who will conduct these works with a period-instrument sensibility, vastly different than Muti’s more Romanticized approach.

The October 7-9 program will remain the same and includes Wagner’s “Centennial Inauguration” March, Chávez’ Symphony No. 2 “Sinfonia india” and Beethoven’s Symphony No. 3 “Eroica” and will be conducted by Israeli conductor Asher Fisch.

The world premiere of Bernard Rands’ “Danza Petrificada,” which was to be heard October 14-17, will be postponed, and along with the Hindemith Symphony in E-flat and the Cherubini “Requiem” will be replaced with the Mahler Seventh Symphony, conducted by CSO conductor emeritus Pierre Boulez, who is interrupting a sabbatical devoted to composing to appear in Muti’s place.

The Civic Orchestra open rehearsal with Muti that was scheduled for Saturday, October 9 in Pilsen has been postponed.