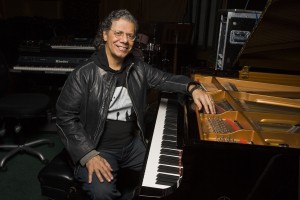 As founder and leader of Return to Forever alongside bassist Stanley Clarke and drummer Lenny White (among others who participated in its various lineups), composer and keyboardist Chick Corea helped change how the public viewed and heard jazz, ultimately playing large stadiums—a feat only accomplished by major rock bands during that era.

But that early triumph has not quieted his genius, and he continues to break barriers with his music, which in later years has been inspired by the teachings of Scientology, the controversial church whose ranks also include actors John Travolta, Tom Cruise and January Jones (of the hit AMC show “Mad Men”).

Alongside him on his current project are equally inventive bassist Christian McBride and drummer Brian Blade, two musicians who are highly in demand on the national scene. McBride received high praise for his recent release “Kind of Brown,” in which he paid homage to the influence of Miles Davis in his work with original material influenced by fifties and sixties jazz, while Blade has split his time working with Wayne Shorter’s band while leading his own Fellowship Band. (Ernest Barteldes)