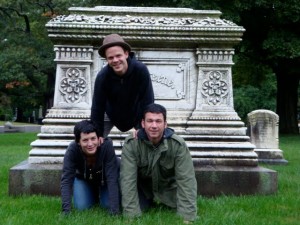 There are a handful of indie musicians who have withstood the test of time, the music industry, touring, the nineties, or whatever was thrown their way. These craftsmen of the three-chord, two-minute pop song go unnoticed in the mass media, yet live on as icons in the underground scene. Those who do this exceptionally well are the most prolific. So why would a band full of such musicians adopt the moniker Forgetters? “I enjoy the idea of a band of forgetters as somehow heretical, a bit melancholy, and also a fair approximation of how we all are, struggling to move forward with limited evidence on hand,” says singer and guitarist Blake Schwarzenbach.

Forgetters are comprised of members from seminal punk bands that are anything but obscure (maybe you’ve heard of Jawbreaker, Against Me! or Bitchin’). The trio of friends, once residents from anywhere between California and Florida, call Brooklyn their home. “Brooklyn is one of the most densely packed musical scenes in the U.S.,” says Schwarzenbach. “I don’t really know anyone who isn’t in a band or associated with music in some way. While that can be overwhelming, it also means a great deal of resources, places to play, people who are avid about music, and a high bar that makes you work really hard to be relevant. It really is a kind of free-market nightmare/dream at once: terribly competitive at times, shamelessly ambitious in some corners, but also seriously energized and alive.” These statements exude a message not diluted with bitter apathy but charged with positive vigor which has been filtered through a lifetime of experience. Feeding off that, they are not exploiting any of their credentials, rather starting from scratch, from the basement up.

Having been around for such a short time the band is forging full steam ahead. Not only will the band embark on their next tour, but will do so in support of a self-released record. “We’re putting out the record ourselves with the help of distribution from Revolver in San Francisco, “says Schwarzenbach. One might think this record would be gobbled up but by any reputable indie label, and maybe it will, but it’s possible the collective intuition of the band has kept this one close to their chest.

The audience can look forward to this band as something unassociated with past projects. Taking the hype out of the equation, Forgetters aim to stand apart from any preconceived notions. Raw and energetic could be used to describe their old projects. Current and mature seems more appropriate for this outfit. “I want people to see this band as a weird thing that the three of us have built up over the past year, a work in progress and a snapshot of now, and I want people to be surprised or even disappointed at how far from Jawbreaker or Bitchin’ or Against Me! this music is,” says Schwarzenbach. “I think the basic spirit of our past work is present, but we make this music together (and many years after the fact of our previous bands) so that it is decidedly different.”

As for the tour, they will perform in Chicago, a first for the band, and maybe quite a few years for each member. “I’ve always had remarkable experiences with audiences in Chicago and terrible experiences with driving there,” Schwarzenbach states. ”The enthusiasm of the people who come out to shows is enough to warrant the hours of nail-biting fury it takes to get into and out of the city.” But in the end, there is more at stake than that. Forgetters plan to begin their own history, complementing anything that has been preceded. “Basically we’re touring so people can see that we’re for real and not some internet rumor,” jests Schwarzenbach.