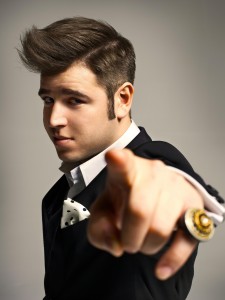 This Boston-born singer-songwriter is what one would call sort of an old-school blue-eyed soul performer. He has great vocal delivery and a solid band (called The True Loves) behind him, and is currently on tour promoting his major-label debut,”Come And Get It” (Capitol/EMI). Though he writes his own songs, the influence of the likes of Otis Redding and Marvin Gaye are immediately felt in his music, which has a retro sixties-like feel, and that is augmented by his stage demeanor and also by his choice of instrument—a well-preserved 1958 semi-acoustic electric Gibson.

But none of that demeanor would matter much if he weren’t a talented tunesmith in his own right. An example is “Name Calling,” an up-tempo number with a very catchy hook, and also “The Satisfier,” an Otis Redding-meets-James Brown funk that often serves as a show opener.

Reed has the virtues of a great star in the making. He has the stage presence, the charisma and the talent necessary to make it big, and with the support of a major label behind him, you can only expect him to be playing larger venues in no time. (Ernest Barteldes)