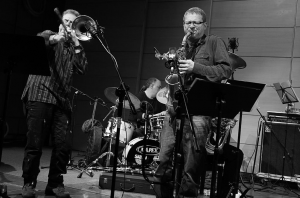 This Polish-American duo collaboration can be described as serendipitous to say the least. Saxophonist  Mikolaj Traska and  US-born trombonist Steve Swell first worked together while participating in Ken Vandermark’s ensemble in Krakow, Poland in 2007, and have since played as a duo both in the US and Europe over the years.

Their take on jazz isn’t for everyone, though. Experimental jazz can both amaze and confuse listeners, and this is true for the kind of sound developed by Traska and Swell. However, fans of the genre (there are various clips available on YouTube) will marvel at their capacity to seemingly extract sounds out of thin air and keep it interesting throughout the performance. A confessed fan of Ornette Coleman (whose skills inspired him to pick up the saxophone in the first place), Traska is also a gifted composer with vast recorded works in his native country—some of which he will be sharing during this rare US tour with his New York-based musical partner. (Ernest Barteldes)