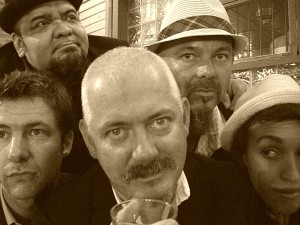 Jon Langford has grit in his voice and melody in his soul. A punk-rock pioneer, a leading light of alt-country, a troubadour for our times, a musicians’ mentor, a visual artist of uncommon skill, a singer-songwriter who writes with the authority of having lived a life rather than just having imagined it, how do you peg Langford? Is he folk, rock, country, punk, what? Yes, he’s all that. Langford is Langford, a transplanted Welshman who’s been in Chicago long enough for us to claim him, and in doing so, stake a claim to a treasure. Langford’s new album with his Skull Orchard co-conspirators, “Old Devils,” plays like the new story collection from a favorite author: engaging tales, beautiful hooks and a singular musical voice. Who else can get you humming along to a song like “Getting Used to Uselessness” like it’s “We are the Champions” or something? The Old Devils Ball, a pre-Halloween record release party with Jon Langford and Skull Orchestra, also features Andre Williams and the Gold Stars, Sally Timms and MC Danbert Nobacon. (Brian Hieggelke)