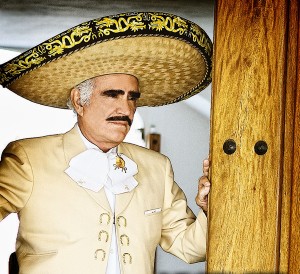 The Mexican ‘king of rancheras’ needs little introduction. For nearly half a century, Vicente Fernandez has thrilled fans around the Americas with his songs about love won and lost, drowning one’s sorrows over romantic disappointment and, of course, his beautiful native land.

He is currently kicking off an American tour in support of his latest release, “El Hombre Que Más Te Amó” (“The Man Who Has Loved You The Most”), a collection of new songs recorded under the musical direction of his longtime collaborator Javier Ramirez. However, this is the first time ever that Fernandez himself served as a producer for one of his own discs—an experience he has reportedly cherished taking part of.

Though little known by fans outside of the Latino community, Fernandez’ shows are events that usually sell out quickly, and usually help relieve the homesickness that many of his fans feel—and the music is also highly enjoyable, whether you can understand the words or not. (Ernest Barteldes)