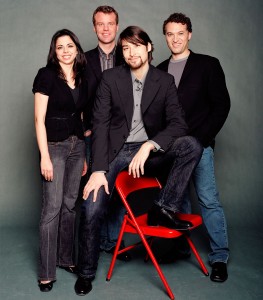 Odd as it may seem, there has never been a complete Shostakovich string quartet cycle in Chicago. The Grammy Award-winning Pacifica Quartet—made up of violinists Simin Ganatra and Sibbi Bernhardsson, violist Masumi Per Rostad and cellist Brandon Vamos—has presented acclaimed complete string quartet cycles locally of Beethoven, Mendelssohn and Elliott Carter, and had the brainstorm to rectify that situation and offer a complete Shostakovich cycle at long last.

Because of the Pacifica’s annual residency at the University of Chicago, executive director of University of Chicago Presents concert series Shauna Quill became involved and put together what she calls a “think tank” of U of C scholars that had “a million wonderful ideas.” The end result is “The Soviet Arts Experience,” a sixteen-month-long showcase of works by artists who created under—and in response to—the Politburo of the Soviet Union, designed to give festival-goers a rare opportunity to go behind the Iron Curtain to explore its essence through the creative work of its visual artists, choreographers, composers and dramatists.

Since first announced in March, the Soviet Arts Experience has grown from eleven partners to an impressive and unprecedented array of twenty-six festival partners of major area arts venues and institutions, including the Art Institute of Chicago, the Auditorium Theatre, Northwestern University’s Block Museum of Art, the University of Chicago’s Center for East European and Russian/Eurasian Studies, Roosevelt University’s Chicago College of Performing Arts, the City of Chicago’s Department of Cultural Affairs and the Chicago Cultural Center, Chicago Sister Cities International, the Chicago Symphony Orchestra, Chicago Opera Theater, Court Theatre, the DuPage Symphony, the Golosá Russian Choir, the Goodman Theatre, the University of Chicago’s Graham School, the Grant Park Music Festival, the Harris Theater for Music and Dance, the Smart Museum of Art, Russian Foundation of Chicago and University of Chicago Presents, among others.

More than a hundred events will take place in twenty-five venues across the area from October 2010 through January 2012, including seven art exhibitions, nine dance performances, over fifty concerts, two theater productions and numerous lectures, classes and symposia. 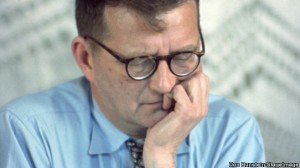 But the heart of the Soviet Experience remains the works that sparked the festival in the first place, the Pacifica Quartet’s traversal of the complete string quartets of Dmitri Shostakovich. The Pacifica will present all fifteen quartets along with the Piano Quintet (with pianist Orion Weiss) in Roosevelt University’s intimate Ganz Hall (430 South Michigan, seventh floor) across five programs, the first of which takes place this Sunday, October 17: Quartet Nos. 1, 2 and 3 will be performed at 2pm and repeated at 7pm. The rest of the series—all Sundays at 2pm with repeats at 7pm in Ganz Hall—will be presented October 31 (Nos. 4 & 5, Piano Quintet), January 30 (Nos. 6, 8 & 9), February 13 (Nos. 7, 10, 11 & 12) and February 27 (Nos. 13, 14 &15). Seating is unreserved and tickets are $35 per concert; (847)242-0775.

Composed from 1938 to 1974 against the backdrop of turbulent events in the life of the Soviet Union and spanning more than thirty-five years of his creative output, the string quartets reveal Shostakovich at his most introspective, unlike his more public and government-scrutinized—and sometimes government-censored—large-scale works. The Pacifica Quartet are performing the quartets in the order of their composition, offering a unique and thorough perspective on the composer’s development and creative trajectory.

Would Shostakovich’s music have been different if he hadn’t been writing under Soviet scrutiny and censorship? “No,” the composer’s son Maxim told me, without hesitation, back in 1992, “because there’s still a lot of tragedy and difficulties in human lives. It was far more difficult for [Soviet] poets and writers because they had to name things by words, you know? But I think he would have lived longer [he died in 1975 at age 68] if he had been free and lived under normal conditions. He suffered a lot, and was always under pressure and criticism. If he had lived in a free society, he might have composed more open works with words, but his musical language would be the same.”

Because Shostakovich was writing in the more abstract language of music, the precise meaning of his music has always been ambiguous, at the very least. Conductor Mariss Jansons told me in 2006 that Shostakovich would attend rehearsals of his own works and had “very precise ideas about how the music should sound and knew what he wanted, but was always reluctant to discuss the meaning of any of his music.” “People who really understood [his] music,” said Maxim Shostakovich, “always read between the lines.”