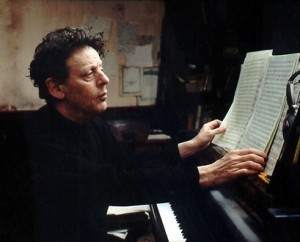 “It’s a problem,” composer Philip Glass told me in 1989. “The first problem any composer has is finding a voice, and the second problem is getting rid of it. You often hear from people, ‘Oh Glass, he always sounds the same.’ It doesn’t really, but you have to make a big effort for it not to sound the same. It’s very hard to do that because it’s like trying to look at yourself in the mirror and ponder, ‘Okay, what do I really look like? What is my style of dressing?’ You can’t possibly be objective about it, and yet you can’t just trust what the papers say or what your friends tell you.”

A decade into the twenty-first century, it is now clear that Glass is the most prolific, successful and emulated American composer of the last quarter of the twentieth century, if not beyond. Although he has always disliked the term, Glass is considered one of the founding fathers of Minimalism, a style of music characterized by static—though slightly shifting—repetitious traditional rhythmic and harmonic patterns. Glass is so recognized as the high priest of the movement in the public imagination that he inspired a character on the “South Park” animated television series called Glass, who likes to write pieces based on a single note.

La Monte Young’s experiments with repeated and sustained tones are often viewed as a prototype for the movement, although Terry Riley’s “In C” from 1964 is widely recognized as the first Minimalist composition and Steve Reich’s use of multi-tracked tape loops that would gradually go further and further out of phase as his music progressed was another pioneering use of the style.

Glass, however, achieved a level of success and attention with his distinctive and multimedia use of Minimalism which became something of a pop-culture phenomenon, and which went on to influence a wide variety of musicians across musical boundaries.

Although Glass grew up in Baltimore, it was while he was majoring in mathematics and philosophy here at the University of Chicago that he began practicing avant-garde piano scores by Charles Ives and Anton Webern and began composing pieces in the atonal and complex twelve-tone system that had been developed by Arnold Schoenberg in the early twentieth century. Determined to become a composer, Glass headed for New York and attended the Juilliard School, where he studied with Vincent Persichetti and William Bergsma.

Upon graduation, Glass felt he still had not found his own compositional voice, and went to Paris for two years of intense study with legendary composition teacher Nadia Boulanger. Although Glass has always credited Boulanger for opening his ears and teaching him how to hear music from the inside out, it was his encounter with Indian music while he was in Paris that brought about a total transformation of his music.

Asked to transcribe film music written by Indian music master and sitar player Ravi Shankar to Western notation for French musicians to perform, Glass became obsessed with Indian notions of musical form and rhythm and began incorporating these ideas into his own pieces when he returned to New York. Having renounced his previous works and the then academic fascination with twelve-tone music and atonality, Glass formed the Philip Glass Ensemble in 1968 to begin performing his new style of reductive and tonal music.

Understanding the relationship between Eastern culture and Minimalism remains crucial in comprehending its broad and ongoing appeal. Glass himself has spent a great deal of time studying Eastern music and thought and is a practicing Buddhist. While the West tends to view repetition on a literal level, the East often uses repetition as a means to an end.

In the case of a mantra, a phrase is repeated over and over again as the basis of meditation so that the participant may achieve a higher level of awareness; the repetition becomes a conscious way to move beyond consciousness. Many who have become virtually addicted to Glass’ music report similar experiences, while detractors hear only tedious and trivial repetition.

Of course, Minimalism is hardly the only Western style of music to have repetition be such a central element, a fact that violinist Robert McDuffie cleverly recognized in commissioning Glass to write a contemporary “Four Seasons” to be able to be paired alongside the original version by Vivaldi, a composer as known for repetition in the eighteenth century as Glass is today.

The result is Glass’ Violin Concerto No. 2, “The American Four Seasons,” which was given its world premiere last December and has just been released on Glass’ own Orange Mountain Music label by McDuffie and Marin Alsop and the London Philharmonic Orchestra; McDuffie and the Venice Baroque Orchestra are offering the Chicago premiere of the work Sunday afternoon at the Harris Theater alongside the work that inspired it.

What will strike those familiar with Glass’ vast output is that the solo violin pieces that introduce each of the four movements are not just the usual repeated arpeggios that have become a virtual Glass trademark, although not to worry, the work will not disappoint in the long run and does come around to the familiar style, particularly in the finale.

Unlike the Vivaldi original, which clearly designates which season in being musically portrayed, McDuffie came to a different conclusion than the composer as to which season was which in Glass’ aural rendering. Thus Glass, in a move more reminiscent of John Cage or aleatoric composers, has decided not to reveal his intended designations in order to allow listeners to make up their own minds as to which season is brought to their mind as they hear the four movements of Glass’ music.