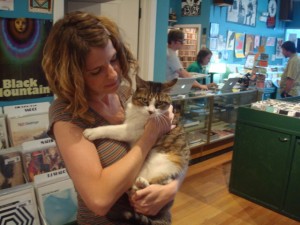 When Permanent Records opened in 2006, it seemed like a risky move—the music industry was in the midst of the digital revolution, and suffering for it. But rather than flailing, Permanent Records expanded. Located in a quiet neighborhood, near Chicago and Wood, it’s a physically small store, but one that’s added its own spice to Chicago’s music scene. Friendly smiles greet you at the door, vinyls and CDs give off an aroma that fills the entire room and a cat walks around greeting customers. Visitors get a sensory high from the surroundings: posters, paintings on the walls, little figurines, a Sonic Youth skateboard and, of course, the music itself.

Permanent Records cultivates an atmosphere as unique as its music collection. Zaireeka, a friendly “store kitty,” is its mascot. “She loves customers,” says Liz Tooley, one of the store’s co-owners. Zaireeka slinks all over the CD collection to greet people and craves attention—it can be difficult to distract customers from the treasure trove of vinyl and CDs. But in the end, it all comes down to the music. “We’re a little bit selective with what we take in on both CD and vinyl because we want to keep within the genres that we want to sell. When you make yourself more of a niche market then you get more of a niche customer,” says Liz.

They carry mostly punk and psychedelic music with a sprinkling of old-school hip-hop, free jazz and good soul. Liz says that while they share the music they’re passionate about, the point isn’t to be music snobs dictating what other people should listen to. “Even if we don’t carry the Celine Dion CD that your mom wants we’ll special order it for her. We’re not going to be rude about it,” she says. “Everybody likes what they like… It shouldn’t matter what kind you love or you shouldn’t be embarrassed about it.” Permanent Records carries mainstream music but also focuses on carrying “really unusual things that would be hard to find in download form,” especially in their vinyl collection. Believe it or not, their vinyl sales surpass CD sales. “Vinyl collectors are just a fun group of people that are very loyal to the bands that they love and they’re very loyal to vinyl,” says Liz, who says that while most of their patrons are between 25 and 35 years old, their vinyl collection attracts a diverse age range. 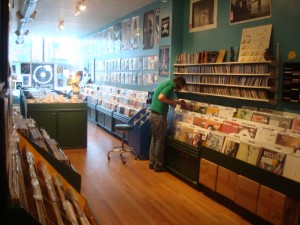 Just about every Saturday around 5pm, you’ll find the store a lot more crowded and noisier than usual. Bands, usually ones Permanent Records carries, play a set. It’s an all-ages crowd, a highlight for younger people in a city where most venues are at least 17 and up. It’s an intimate affair, one that can easily get crowded—they’ve hosted anywhere from a typical thirty people up to a jam-packed 200-person audience for bands like the Meat Puppets and Time’s New Viking.

Permanent Records knew they wanted to become part of the scene even before they set foot in Chicago. Before opening the store, Liz and Lance Barresi, the other co-owner, worked at other record stores for fifteen years, eventually moving up to managing positions. “I have been doing this since I was 17,” she says. Liz and Lance worked separately, but they decided they wanted to open their own record store together. “We started taking trips around the country to decide where we would like to open the shop,” says Liz, who says they chose Chicago in part because it was close to family in Missouri. But a big draw was the city’s music scene. And, she adds, “There was a need for more vinyl in the city, and we’re really excited to do it.”

Coming up with a name for the store wasn’t easy. “Anything that you can imagine that would go and sound catchy with ‘records’ we thought of, but a lot of them already existed.” They chose to call the store Permanent Records, which Liz says “works for us because it’s funny in the sense that if you get in trouble you get a permanent record, but also vinyl is somewhat permanent because the format itself lasts for like 100 years or so.” There’s a hopefulness to the name as well. “We love records and we want them to stick around for as long as possible,” she says.

A year after opening the store, Permanent Records launched a record label. “We basically started that because there was a CD that we had by a band from our old hometown, Columbia, Missouri, and we were like, ‘When are you doing the vinyl? We want to carry the vinyl at the shop,’ and we were always bugging them. And they were like, ‘If you want it so bad, why don’t you put it out?’ So then we just started a record label.” Their record label, Warhammer 48K, has since released twenty-four albums. The label works like their music collection: they only chose the bands they love and know well. Liz says they usually seek bands out, and it’s rare for them to release an album a band promotes to them. “It’s a very personal thing,” Liz explains. “It’s bands that we 100-percent stand behind and love, and love the recordings that we’re doing with that particular band.” They don’t make much money from the records they press.

So why do young people in the twenty-first century still collect vinyl? “You’ll hear parts of the song that you can’t hear in an MP3,” says Liz, who describes the sound of a record as warm and not “tinny” like an mp3 or CD. Liz describes the difference in the sound waves: “A record gives you the full wave. Whenever you have CDs that wave is cut in half so you get the top half and then when you get to mp3s you get the top eighth of the wave. So you’re really missing out on the wave the band wanted you to hear their music,” she explains. “I hope that people know that they’re not listening to the way it’s meant to be heard, and that the sound quality is so degraded when it comes to an mp3 [you] might as well be listening to your song through a tin can.”

Liz is convinced the advantages of vinyl are enough to keep people coming back. Ten long years from now, she says Permanent Records will “probably be on release number 200 of our record label. Probably have more cats, more employees. We started a web store last year so hopefully it’ll just grow. And maybe another location on the West Coast. We’re currently thinking about it so maybe within the next few years even we’ll be there … Come back here in the summer, go there in the winter. That’s my dream.” Looks like Permanent Records is living up to its name.