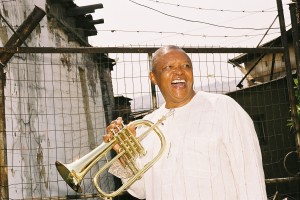 Jazz musician, singer and activist Hugh Masekela has had a storied career which stretches for almost half a century. Driven from his homeland due to the brutal apartheid regime in the early sixties, the trumpeter spent some time in the United States, where he studied at the Manhattan School of Music. He had several hits on his own, and also guested in several other artists’ recordings, including The Byrds and Paul Simon, with whom he shared the stage during the legendary “Graceland” tour, which also included Miriam Makeba and Ladysmith Black Mambazo.

He is best known internationally for his single “Bring Him Back Home,” which became an anthem during the struggle to release Nelson Mandela from jail. In 2004, he released his autobiography “Still Grazing: The Musical Journey of Hugh Masekela,” in which he gave a detailed history of his two-decade struggle with alcoholism. He continues to tour and record regularly with his mix of jazz, African beats and pop sensibilities. This will be his debut performance at Symphony Center, which makes this a very special evening. (Ernest Barteldes)