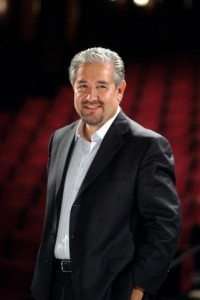 With the suspense over as to who would actually succeed Paul Freeman, the Sinfonietta’s founding music director who is retiring at the end of the 2010-11 season after twenty-four years in that position, the ensemble still has a few surprises up its sleeve for this Freeman-farewell season nonetheless.

As with its longstanding annual Martin Luther King Day concerts each January, the Sinfonietta is experimenting with another annual concert tied to a holiday, in this case the Mexican “Día de los Muertos,” or “Day of the Dead.”

“In December, holiday concerts are certainly not hard to come by,” Freeman, who has already moved back to his home base in the Virgin Islands and now commutes for his concerts here, is quoted in a press release. “But something around the Day of the Dead and Halloween is much less common in classical music, so we decided to seize the opportunity. We hope this concert can become a new annual tradition for the Sinfonietta.”

Mexican conductor Hector Guzman, who will be the guest conductor to inaugurate this new tradition, is excited not only for the opportunity to work with the Sinfonietta again—which he first conducted two seasons ago and considers an “excellent orchestra, very attentive and professional”—but to be able to showcase important Mexican music while helping to celebrate a holiday that meant so much to him growing up in Mexico.

“The Day of the Dead is not a sad occasion,” says Guzman, “but a celebration of life. There is no sadness. We remember the ones who have passed, yes, but in a joyous celebration with food and family reunions and a looking forward to one day joining them.”

The Day of the Dead is celebrated on November 2, All Soul’s Day, the culmination of a three day festival of death that begins on October 31 on the eve of All Saint’s Day and continues through November 1 and 2, both Mexican national holidays and, most important for children, “time off from school,” Guzman notes. Families get together and honor their ancestral deceased with sugar skulls, marigolds and favorite foods and beverages of the departed placed on private altars with photos and candles or brought to their graves as gifts.

The living not only remember the dead, but the humorously macabre holiday serves as a sober yet whimsical reminder that we, too, will one day join the dead, and thus also functions as an annual reflection on our own mortality with a Catholic hope for an afterlife. 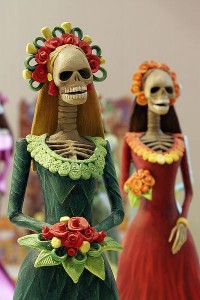 Despite the grotesque imagery, skeletons are often represented in a playful and celebratory manner participating in the activities of the living. There is a festive and celebratory flavor to the holiday that allows the living a temporary laugh at death since death itself will always have the last word. Children are often given a sugar skull with their names on them, and there is feasting, dancing and music. “That is so typical of the Mexican attitude,” says Guzman; “We poke fun at everything, including death.”

Guzman is music director of the Plano Symphony, the Irving Symphony, the San Angelo Symphony and the Filarmonica de Jalisco and was a protégé of the late Eduardo Mata, with whom he studied for twenty years and whom he describes as “a man of integrity, both musically and personally” and who made music on the “highest possible level.” If even some of that has managed to rub off on Guzman, “how wonderful!” he says.

The eclectic Day of the Dead concert program compares and contrasts the somber European traditions of mourning for the dead with the more jubilant death celebrations of Latino cultures.

The spooky side of the season will be represented by Mussorgsky’s “A Night on Bald Mountain” which musically portrays a riotous Witches’ Sabbath on a mountaintop and was used for the finale of Disney’s “Fantasia,” followed by Ravel’s haunting and evocative “Pavane for a Dead Princess.” Spanish composer Manuel de Falla’s “Nights in the Gardens of Spain” with Spanish pianist Joaquín Achúcarro will round out the European half of the program.

“That [Achúcarro] was available for this concert is an immense coup,” says Guzman, “not only because of the immense affinity that he has for this music, which he just recorded with Sir Simon Rattle and the Berlin Philharmonic, but also because he is one of the finest pianists there is, a really sensitive artist.”

The Latin half of the program includes works by Mexican composers, including Eugenio Toussaint’s celebratory “Popul-Vuh” and Arturo Márquez’s “Danzón No.2,” an aural take on the popular Cuban dance style. Dance, so associated with “Day of the Dead” festivities, will also be celebrated with Argentine tango master Astor Piazzolla’s most popular tango “Oblivion,” widely associated with the “Tango Nuevo” movement.

No “Day of the Dead” celebration would be complete without a lively fiesta, and José Pablo Moncayo’s “Huapango,” supplies just that, incorporating folk songs from the Veracruz region on the Gulf Coast of Mexico.

“We wanted this to be happy, but legitimate music from Mexico,” says Guzman, “reflecting the current state of Mexican music. The Márquez and Moncayo pieces have already become national emblems of Mexican culture, but we added a piece [by Toussaint] that is not as well known but which concerns the sacred book of the Mayas and reflects life, death and nature, all entangled in Day of the Dead celebrations.”

On display in the lobby of Harris Theater before the concert and during intermission, the National Museum of Mexican Art will display artwork related to the Day of the Dead, including a typically decorated altar or “ofrenda” that would be displayed in a central Mexican home during the holiday along with ancient indigenous symbols that represent the cycle of life.