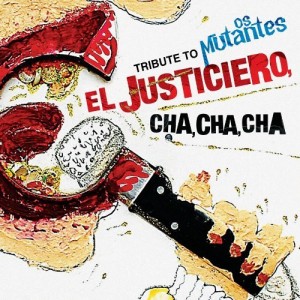 Os Mutantes were one of the most influential bands to emerge during the late sixties in Brazil. The band was tangled up in the Tropicalismo movement—the country’s response to psychedelics—with Caetano Veloso, Gilberto Gil, Tom Ze and others, but they were lucky enough to escape mostly unscathed from the political persecution that Veloso and others suffered from the military dictatorship that took control of the country after a coup in 1964. The band went on to have a fruitful career that lasted until they ultimately broke up in 1978 after suffering numerous lineup changes. They remained dormant until the Baptista brothers reformed the band in 2006 sans Rita Lee, who refused to participate in the relaunch.

After a successful US tour, Arnaldo Baptista once again left the group in 2007, leaving his brother to lead the new lineup (which includes founding drummer Dinho Leme), which released “Haih or Amortecedor (Anti)” in 2009.

The band’s most direct reference came straight from the Beatles and The Rolling Stones, but they also borrowed from the sounds they grew up hearing in Brazil. Their sound incorporated everything from soul, jazz, samba, early funk and other genres—a mish-mash that ultimately became the band’s signature.

Over the decades, Os Mutantes influenced numerous contemporary musicians, including the late Kurt Cobain, Beck and David Byrne—who re-released the band’s albums on his Luaka Bop label, including a live recording of their 2006 reunion show at London’s Barbican Theater. Their influence is also felt in Latin America, where their sound can be felt in the music of groups such as Pato Fu (Brazil). Aterciopelados (Colombia), Café Tacuba (Mexico) and others.

Two of the bands mentioned above are part of “Tribute to Os Mutantes: El Justiciero, Cha Cha Cha” (Nacional), which features some of the timeless tunes created by the band mostly during their 1968-1972 phase. The disc opens with La Manzana Cromatica Protoplasmatica’s update to the controversial hit “Ave Lucifer,” a stream-of-consciousness tune mostly written by Arnaldo Baptista. Gone are the sixties backward tapes, which are replaced with more electronic elements that keep the tune as trippy as ever.

“Beija-Me Amor” features Brazil’s Arnaldo Antunes sharing the spotlight with Argentina’s veteran vocalist Liliana Herrero. Their version sounds like an unlikely blend between bossa nova and tango recorded after a few too many glasses of wine—but brilliant nevertheless.

Aterciopelados disappoint on “Vida de Cachorro.” While one could expect something on the creative level of their 1991 version of Queen’s “Play The Game,” here they pretty much play second fiddle to Sergio Dias, who plays it pretty much as he did on the original version except maybe for his Portuñol—a mix of Spanish and Portuguese.