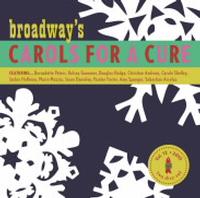 “Carols for a Cure” has reached its twelfth edition with the same objective: to reunite the performers of currently running Broadway shows in the production of a CD relevant to the holidays. The two-disc album features a collection of both traditional and original material—all recorded to benefit Broadway Cares, an organization dedicated to fighting AIDS.

Previous editions contained plenty of humorous and satirical material (last year they featured a mock treatment to “The Twelve Days of Christmas” from the cast of “Jersey Boys,” for example), this time around the casts mostly went with revamping better-known material within the format of their shows. The disc opens with Chuck Berry’s “Run Run Rudolph,” from the players in “The Million Dollar Quartet,” reimagined if Elvis, Carl Perkins, Johnny Cash and Jerry Lee Lewis had recorded it back in 1956—complete with Lewis-like piano riffs and Perkins-styled chord solos. “Mamma Mia” contributes a sunny take on O Holy Night,” while “West Side Story” comes up with a touching bilingual version of “O Come All Ye Faithful.”  “The Addams Family” is featured with “It’s Chanukah,” the token song in honor of the Jewish  holiday.

“My Fair Lady” stays true to its character, with narrations from “Henry Higgins” (Thomas M. Hammond) pestering “Eliza Doolitle” (Rachel Moulton) for her cockney enunciation—all using dialogue directly adapted from the famous play. The cast of “La Cage Aux Follies” (including stars Kelsey Grammer and Douglas Hodge) gives a beautiful rendition of “We Need a Little Christmas,” while “In The Heights” comes up with the original “Vengan!,” a catchy Christmas salsa.

Not all the moments are great—I expected a more-rocking treatment of “Do You Hear What I Hear” from the cast of “American Idiot” and having “Christmas Lullaby” as an instrumental (by the Broadway Strings) sounded a little out of place. However, “Rock of Ages” ’ mock-metal  version of  “It Came Upon a Midnight Clear,” the soul treatment of “Carol of The Bells” from the cast of “Memphis” and the Beatles-revivalist original “Wishing You a Very Merry Christmas” is worth the price of the disc alone. (Ernest Barteldes)

Order the CD at broadwaycares.org