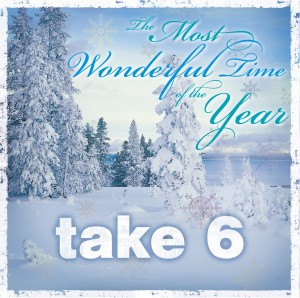 Holiday albums are inevitable for any kind of artist (even Bob Dylan tackled the genre in 2009), and it is hard to bring much innovation to the classics that most people know, especially if you are doing it for the third time.

This is the case of Take 6: after releasing two Christmas albums (1991’s “He Is Christmas” and 1999’s “We Wish You A Merry Christmas,” both on Warner Bros. Records), the Alabama-formed sextet explores the holiday catalogue once again. While the two first were more religious, this time around they include more secular songs, such as “White Christmas” and I’ll Be Home For Christmas” and “Jingle Bells.” The biggest surprise is the suite “Mr. Grinch/You’re a Mean One, Mr. Grinch,” a very tongue-in-cheek rendition of a classic that is hardly ever featured in this kind of disc.

The group’s vocals are impeccable. On “I’ll Be Home,” the vocal arrangement goes into a very soulful direction, while “The Sugarplum Dance” blends their classical training with their gospel and jazz influences, especially their vocal homage to Miles Davis. (Ernest Barteldes)