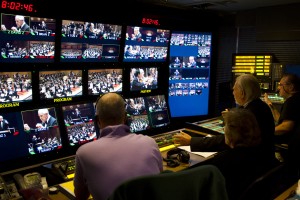 “I knew when I received ‘the call’ that something was out of the ordinary,” admits Pierre Boulez, who was on sabbatical from conducting in order to compose back in October when Chicago Symphony Orchestra management interrupted him with an SOS to step in for an ailing Riccardo Muti. “The second sentence,” he laughs, “was something like, ‘We know that you are free.’ ”

The irony was that Boulez himself was having health issues. “I had eye surgery for glaucoma that was completely unforeseen. I asked my doctors, ‘Can it wait?’ ‘No,’ they said because it was a difficult repair and they are now very happy with how it all went. I am not entirely happy with my eyes, but it is early yet. The left eye has already improved. I see, but not clearly.”

“But I did accept,” says Boulez, “for the team here, which is wonderful. And for Muti, who was at the end of his strength and was very anxious to go home to his doctor. I was in the same case with an ophthalmologist here, so I could understand him very well, wanting to get back home to his own doctor.”

Did Muti himself ever contact Boulez at any point along the process? “He was initially so de-energized, but I did get two very nice messages from him later on thanking me.”

Today, Boulez’s eyes are sensitive from drops he still has to take. Even the moderately lit lamp in his dressing room is providing enough light for him to occasionally shield his eyes as he converses.

Was his eyesight affecting his composition work? “Not really,” says Boulez, since what he is composing is already worked out in his mind before he begins the notation process. Not having seen him write recently, I wondered if glaucoma or age-related eyestrain in general had changed Boulez’s meticulous and tiny handwriting. “It is exactly the same spacing,” he says.

And when the CSO or other distractions aren’t interrupting him, what is the process? Where, when and how does he compose? “I prefer Baden,” he says of his longtime German estate, “but I can also work in Paris,” where he has an apartment. The advantage of Baden is that I am rather isolated there.” One thing he cannot do easily is work on the road. “The lighting in hotels is never bright enough and the desks are never large enough for my scores.”

Boulez the conductor and public persona has always been such a meticulous person, and certainly the pieces themselves of Boulez the composer are as well: does the same also apply to Boulez’s compositional working habits?

“I can get very lost in my work,” he admits, and indeed, he once told me that he felt that the best composer is like the Chinese landscape painter who actually disappears into the painting he is creating. He balances strictness and freedom as a conductor and composer, respectively, and admits that he can be quite “free” with his working habits when there are no schedules and interruptions. “I can be working straight through until five in the morning,” he says. When I mention that it is impossible to imagine Boulez, the epitome of the restless yet disciplined artist, “sleeping in,” he smiles and quietly admits with a half smile, “No, I do not.” How does Boulez rest or clear his mind? “I read.” 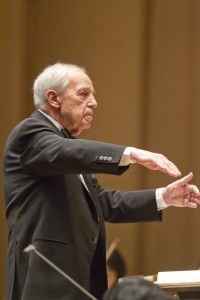 The commissions that Boulez is working on include the orchestration of “Notations” that the CSO commissioned for Boulez to premiere for its centennial way back in 1991, and a violin piece that is “already five years late” for Anne-Sophie Mutter. “There is also an orchestra piece for the 150th anniversary of the Vienna Philharmonic, which is celebrated in 2015.” And a stage work that has obsessed its composer for several years but which is bogged down by practical problems that have nothing to do with the music.

The encounters that Boulez the conductor has had here with Mahler—including his Muti substitution with Mahler’s Seventh in October—have also affected Boulez the composer: “They have made a great impact, for sure. I compose works which are much longer now and develop themselves over three-quarters of an hour. I still like to be compact, but with greater diversity. I try to join the two aspects: a kind of ‘moment’ form like Stockhausen, and the big development form.”

Unlike his friend and former CSO music director Daniel Barenboim, who always made conducting Bruckner a priority over Mahler for many years, Boulez says that if he had to choose one over the other, it would be Mahler. “If you take a scherzo by Mahler, for instance, versus a scherzo by Bruckner—which is a basically little bit fatter or thicker Beethoven—Mahler is more massive. The complexity of structure is greater in Mahler and there is a kind of sarcasm, a humor that you never find in Bruckner. The harmony of Bruckner is marvelous, more inventive than Mahler, and Bruckner is much more Romantic in form, in expression, also. The orchestration of Bruckner is always the same range of thickness of instruments and weight whereas Mahler goes from chamber group to large orchestra and uses the orchestra in a much more imaginative way.”

The two CSO programs that Boulez is in the midst of conducting here were designed—as are most Boulez programs—to compare and contrast. “I wanted to set Ligeti against French music,” says Boulez of the Hungarian composer he conducted last week who is best known in Western pop culture as having been used extensively by Stanley Kubrick in his 1968 film “2001: A Space Odyssey.” “My first idea was to bring a piece by [Franco] Donatoni who is also a kind of marginal figure. Ligeti was also marginal, but much more important, the same kind of original type that does not fit any category. I knew that the Ligeti would take up much rehearsal time and I saw the [Donatoni] score very late and with only two rehearsals, you cannot do two scores of this difficulty; we would have needed at least three rehearsals. Ravel’s ‘Ma Mere l’Oye’ was substituted instead: the Ligeti is a chamber work and the Ravel is also a chamber work.”

This week’s program includes music of Schoenberg contrasted with Janácek, whom Boulez describes as “the kind of composer who is very rude, in a way. It is difficult to put him in history. He was born ten years before Debussy, and died fifteen years after. I certainly wanted to compare the refinement of Debussy with the crudeness of Janácek across the two programs, but also, Debussy seldom has the kind of strength or edginess that Janácek has. And of course, the comparison of Czech Janácek, a contemporary of Viennese Schoenberg during his Expressionist phase, could not be more striking. Their geographical distance was an hour by car but their musical difference was worlds apart.”