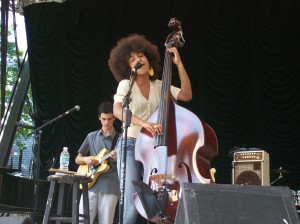 On the opening track of her much-lauded 2008 self-titled major label debut (Heads Up), bassist and vocalist Esperanza Spalding covered Milton Nascimento’s timeless gem “Ponta de Areia.” On her new disc, “Chamber Music Society” (Heads Up), she did not do another of his tunes. Instead, she featured Nascimento himself on “Apple Blossoms,” an original cut featured on this highly intriguing disc that blends her classical training with her jazz, pop and soul tendencies.

This might seem to be a risky endeavor for many musicians, but not to Spalding, who keeps not only an open mind but also a radar-like ear that is able to absorb many sonic influences and still make them her own. An example of this is “Winter Sun,” another original composition that has elements of soul and jazz without too many complications. On the tune, she is backed solely by her trio and some multi-layered backing vocals, but still keeps listeners on their toes with an unexpected upright solo that comes when one thinks the tune is going more into a pop direction. The cover of Antonio Carlos Jobim/Aloysio de Oliveria’s “Inutil Paisagem” (known in English as “If You Never Come To Me”) goes far away from the beaches of Rio. Instead, you get a classically-inspired duet between Spalding and vocalist Gretchen Parlato, who perform both in English and Portuguese with the sole backing of the bandleader’s bass.

In a live setting, Spalding has both charm and technique; she plays both stand-up and acoustic bass, and uses her vocals to transcend the music itself. She has recently been performing as a side player with legendary pianist McCoy Tyner, but during the sets she—intentionally or not—steals the spotlight with both her dexterity and charisma. (Ernest Barteldes)