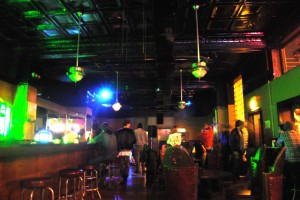 There isn’t much of a crowd assembled at Crown Liquors on a chilly Wednesday night in November. Upon entering, a mirrored wall creates the illusion of extra depth, while vintage chairs and a tin molded ceiling with what looks like decades of layered black paint gives the bar an authentic appeal. Roughly half the people assembled are members of the groups playing, and at least a few—including one Latino gentleman beaming a congenial smile at the slow trickle of art-student types ordering two dollar PBR’s at the bar—do not seem to have come for the music. At first it’s hard to imagine what all the buzz for this Logan Square venue has been about. But when the acts start to play, it comes across.

The crowd may be small, but don’t kid yourself, this is an experience that can’t be had anywhere else outside of a word-of-mouth DIY venue. Maybe that’s because Crown’s booking agent, Brent Zmrhal, started in the business by booking shows for his own DIY venue, Humboldt Park’s erstwhile Crystal Rock, where he helped showcase not only local group’s like the breakout Smith Westerns, but bands on the national scene, like San Francisco’s since disbanded Traditional Fools, which featured Ty Segall as drummer. “It was just a party. Had nothing to do with business, it was just all about the music,” muses Zmrhal.

The liquor store at Crown Liquors has been open since 1933 and the bar, which is connected by a set of frosted-glass communicating doors, has been open at least as long as the original owner’s grandson can remember. Yet, it is only over the course of the last year that this Logan Square stalwart has begun to play host to the wide spectrum of psych, lo-fi and electronic acts which constitute the Chicago underground scene.

Zmrhal recounts how his work with Crown Liquors began last March, when a friend was looking for a venue to throw a thirtieth-birthday-party show. “Crown was a last resort and it turned out that there was a line out the door.” Zmrhal, whose band Mickey played that show, says he could see the potential right away. “It was like you could do anything there.”

Lourdes Arencibia, manager and daughter of the current owner, says that the impetus to start hosting local acts on a regular basis was largely a response to the influx of a different kind of culture into the neighborhood. Whereas the bar up to this point has been largely patronized by Hispanic customers, Arencibia notices, “there is more of a hipster crowd now in Logan Square. Logan Square is changing and we should change with it.” To Arencibia, the move signifies nothing more than filling a gap, claiming that, especially since the end of concerts at Ronny’s, there is no other place for live music in the immediate area.

Moreover, Arencibia feels that she is merely part of a larger emergence of art and culture in the neighborhood. Phantom Gallery is already appropriating disused store fronts in the area to showcase pop-up galleries. And just across the street from Crown Liquors, the Hairpin loft building is undergoing a complete, historic restoration by the Logan Square Arts Center. The renovated space is slotted to be a performing arts center, hosting nightly events and serving as a creative hub for the community.

Even so, not everybody shares Arencibia’s perspective. Some accuse Crown Liquors of helping to facilitate the gentrification of yet another historic Chicago neighborhood. Quoth one irate Yelp reviewer “When a mariachi band walks in to play to the people they’ve played for for years and years is told to leave so that the show can start, gentrification has happened.” But Arencibia takes the criticism in stride. “It can be a controversial neighborhood, people will say something negative about you no matter what you do.”