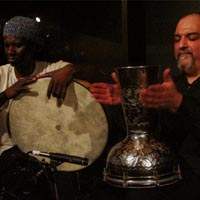 Despite the bitter cold temperatures and the ice-skating sidewalks, the winter solstice should be a joyous occasion, as every darn day after December 21 gets a teensy bit longer, and looonger, and loooooonger, until that sunny June evening when the lingering sun cascades pinks, oranges and golds through the sky, and the deep blue of night falls slowly, a mere two hours before the next day begins its course. Links Hall celebrates the shortest day of the year with three enchanting percussion concerts at sunrise.

Yes, sunrise. Hamid Drake and Michael Zerang, percussionists well known on the local jazz and world music circuits, set the stage (an open wooden dance floor) with a dozen candles and dozens of percussion instruments from the Western world to North Africa, the Middle East and Central Asia—drumset, gong, dumbek, rukk, conga, djimbe, tambourine. They improvise by candlelight for over an hour, winding from drum to drum, creating music that, in a sense, beckons the light.

For the duo, the concert is a sort of meditation. They discuss briefly where to start, but from there they let their energies and twenty years of experience playing together carry them.

“It’s really magical what happens,” reflects Roell Schmidt, director of Links Hall. As the winter dawn gently illuminates the room, she says, “it’s not this huge dramatic thing. The way your body responds to music, especially percussion music, is transformative. It’s like alchemy happens. It makes you feel really wonderful.”

Schmidt insists that even if seats are not available—all three concerts usually sell out—the staff will do their best to accommodate everyone who shows face that early in the morning, lining people along the walls and sitting them in free space around the musicians.

“It’s a really big deal for us because we’re still alive, twenty years later,” jokes Zerang. “It starts the holiday season in whatever way people celebrate. Everyone who drags themselves out of bed is always really glad they did.” (Kristine Sherred)